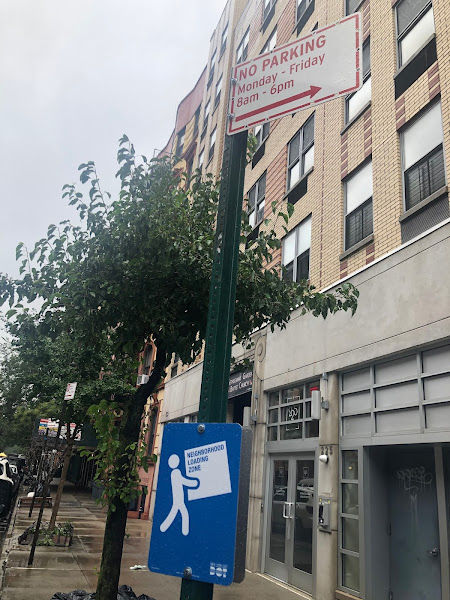 Neighborhood Loading Zones have arrived on Seventh Street and Eighth Street at Avenue C... Dave on 7th shared these photos from the rain yesterday... 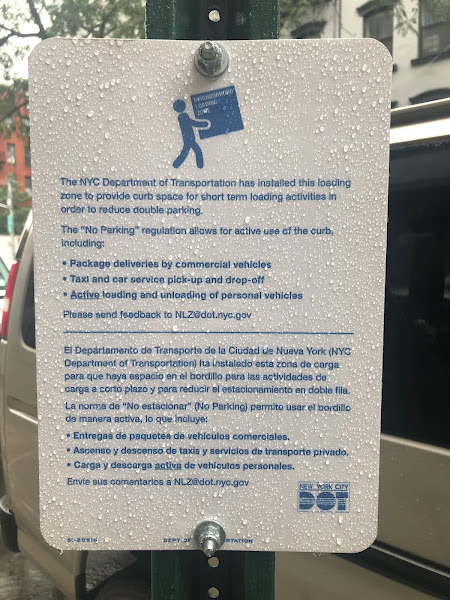 The loading zones for commercial vehicles, residents and taxis and car services are part of the DOT's plan for the Avenue C bike lanes. (Other loading zones are expected on side streets along this corridor.)
Meanwhile, last week, the DOT continued marking the roadway with the new bike-lane designations... 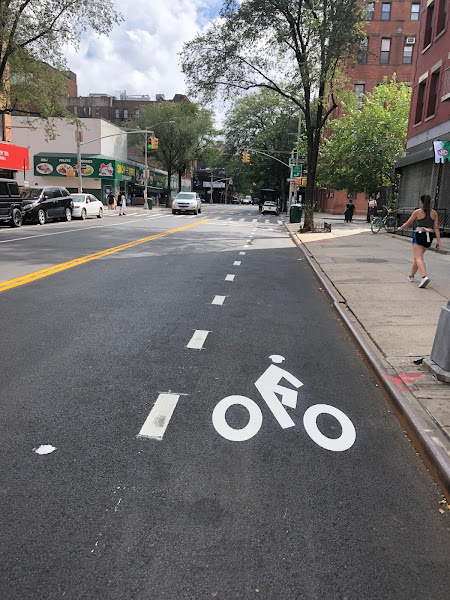 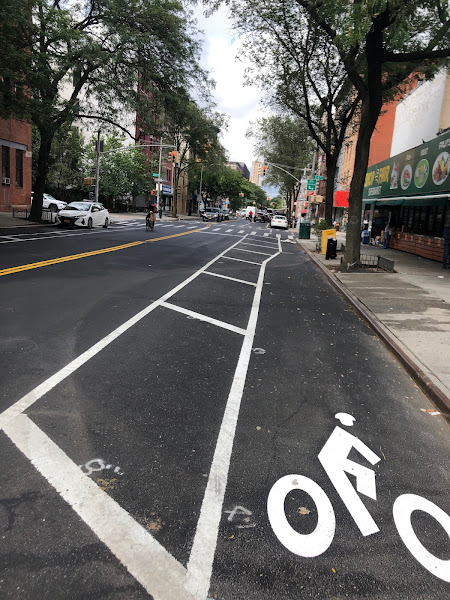 Still a work in progress... as cars and commercial trucks continued to park in the freshly marked bike lanes... 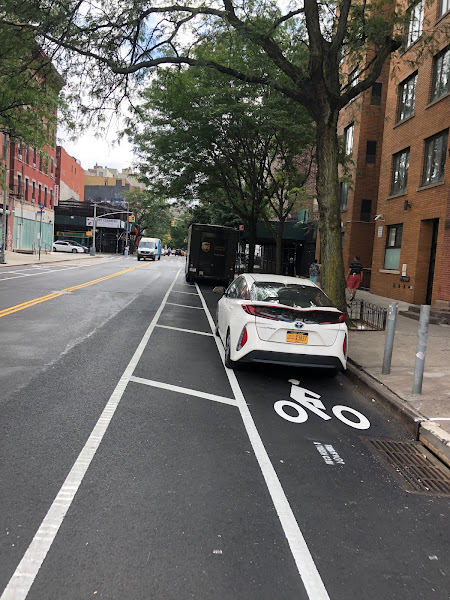 ... and dueling bike lanes were spotted north of 10th Street... 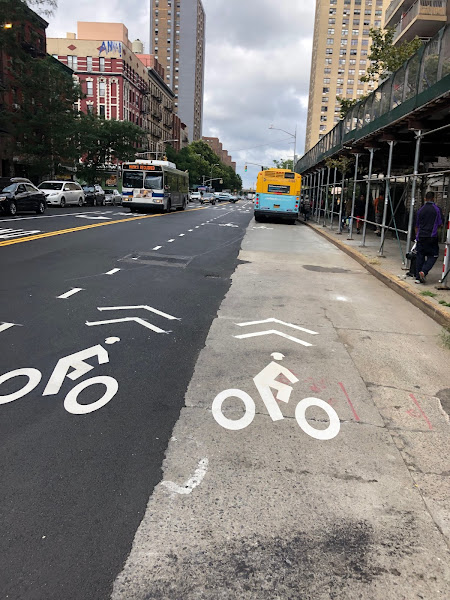 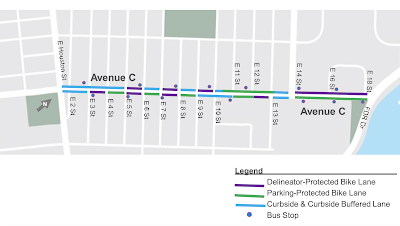 You can find many more details in the presentation that DOT officials made to CB3 back in April. (PDF here)
Posted by Grieve at 5:00 AM

The arrival of Neighborhood Loading Zones is great news: each space means less double parking which means less honking, less emergency vehicle sirens when they are trying to maneuver around double parked cars, less bike lane blocking, less utility vehicles circling the block looking for parking. The problem is that there won't be enough of them: as always the city will do it in baby steps, here and there where there needs to be multiple spots on every block.

They will continue to stop on the bike lane, if there will be no enforcement. Just see the 12 st bike lane joke.

This is all to "mitigate" the loss of the greenway in East River Park.

It also means less parking for residents who will be forced to either pay fines for illegal parking or pay $500 month for indoor parking at a garage.
It also means that we will have less visitors to the EV, which is a double edged sword, less traffic, less noise, less pollution, less rowdy behavior.....and less income for shops and restaurants just when they need it most.

If someone is loading their car and runs into their apt for something, it's going to be an open excuse to give the car a ticket, more money for the city. Seems like you really will have to think it through and plan. The sign doesn't list any specifics, how long to stand, etc., Maybe intentionally vague?

These so called "protected" bike lanes are a joke, as noted in this thread and any real life reporting (see 12th ST and 13th ST bike lanes).

"and less income for shops and restaurants just when they need it most."

This is not backed up by any real metrics. This false talking point was used in opposition of the 14th ST SBS bus only lanes. BTW, I own a car and garage it so spare me the poisonous barbs. I am all for replacing private vehicle parking with true delivery only parking spaces.

It was the beginning of the end when the numbers joint between 10th and 11th shut down and a sushi place and a cafe with outdoor seating opened on C.

What portion of visitors come by car versus bike / walk / transit…

What portion of visitors come by car versus bike / walk / transit…

How are those three related? You could argue that bicyclists benefit from bike lanes, but how will they improve life for the walk/transit crowd?

What is this imaginary alliance between transit users, pedestrians and bicyclists? Are you kidding? Do you ever talk to the former? Hate to break it to you, but most of them consider bike riders to be entitled jerks!

Put simply, this is a cars vs. bikes issue. But back to your question, how many motor vehicles are on the road in NYC at any given moment? How many bikes? Still think the majority should get preference?

"If you want to map inequality in New York, you can just count trees."
https://www.nytimes.com/2021/08/20/nyregion/climate-inequality-nyc.html

"Manhattan’s Lower East Side, now have fewer trees and shabbier parks, which translates to higher temperatures and air-pollution levels and all the health problems that come from them."

If the lower east side already has fewer trees than wealthier neighborhoods then why in the world would we destroy 1,000 80 year old trees with this current flood plan?

There is a better alternative community-involved flood plan that preserves our mature trees.

Even if a pedestrian hates all cyclists with all their bile, they still must reckon with the fact that bike lane infrastructure produces a traffic calming effect that improves safety for all road users.

Such a waste of space. Public parking is already super limited.

So no more double parking? Or no more parking? Great way to make parking even harder for those with cars which are used year round,unlike bike riders..bullshit

This seems kind of dumb. Someone loading or unloading is going to do it at the hydrant nearest where they are going, or right in front of where they are going. Nobody or no truck is going to unload stuff down on the corner in most circumstances. This takes away parking so the car will then have nowhere to park when they are done. Makes no sense to me.