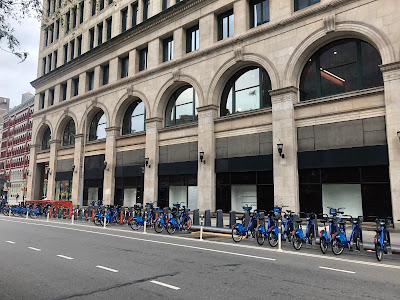 Work permits are now on file for renovations of the former Kmart space at the landmarked 770 Broadway.
Based on the work plan, here are a few takeaways about the future Astor Place Wegmans courtesy of EVG regular Upper West Sider:
Wegmans signed a 30-year lease last month for what will be the grocer's first Manhattan outpost. It is scheduled to open in the second half of 2023.
Kmart closed in this space after 25 years on July 11. Wegmans had agreed to buy out Kmart's lease to make this deal possible.
Posted by Grieve at 4:57 AM

Will miss that 90's era chic Kmart brought to this building.

Is that linked photo this Wanamaker's or the original store that burned down in the 50s across the street? I know this one was the 'annex.'

If the new Wegman's resembles anything like the old Wanamaker's it will be worth the wait. Given that it's a total gut and architectural restoration (which wasn't mentioned initially) the 2 year time frame seems more reasonable.

I wonder if Wegmans will feature it's famously awesome Burgerbar, while being located barely a block from Shakeshack.

PS: Shakeshack is not all that, IMO. If Wegman's offers them some competition, so much the better. I consider shakeshack to be very expensive fast food.

Look at all those citibikes! Citibank must really be lining someones pockets at DOT. The stations are out of control.

Rather have the Kmart back