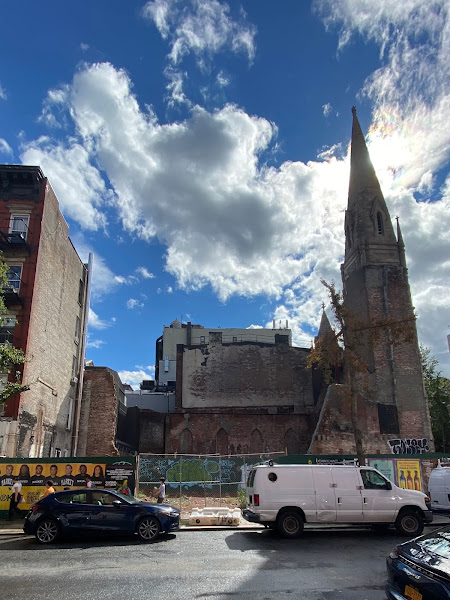 As previously reported a few weeks back, the longtime tenants of 48 E. Seventh St., destroyed in a six-alarm fire last December, are "seeking basic decency" from the building's landlord, acclaimed futurist Faith Popcorn.
The Post has some new information on the story.

[T]wo of Popcorn's tenants, mother and daughter Zwenyslawa and Chrysanna Woroch, are living in a former hotel turned homeless shelter, their lawyer, James Fishman, said.
"They had no place else to go," Fishman said.
The Worochs paid $617 a month for their rent-controlled apartment, which had been in the family since 1957.
The pair filed suit in April against Popcorn's LLC, which owned the property, seeking to have Popcorn, or a subsequent owner, "take any and all actions necessary" to restore their occupancy of the apartment and maintain their rent-regulated status.
Popcorn argued in legal papers that since there is no building, she had no obligation to do so.
"If that were true, then any landlord that wanted to terminate rent-controlled or rent-stabilized tenancies could just simply allow the building to either be burned down or not repair it or whatever," Fishman said. "That can't be right."

The insurance company for four other tenants is also suing Popcorn's LLC for $186,301 in damages, the Post reported.
The misery for the tenants started in February 2020 when a fire displaced the building's residents. No. 48, which included retail tenants Via Della Pace and Cafe Mocha and eight apartments, was under renovation this past fall and was vacant at the time of the December fire, which also destroyed the Middle Collegiate Church next door.
The FDNY previously said that faulty electrical wiring was to blame for both fires. Workers demolished the building on Dec. 7.
According to legal documents cited by the Post, tenants were offered $200,000 each to give up their rights to their apartments in early December.
Photo today by Steven
Posted by Grieve at 5:30 PM

Building is gone, rentals are over.

Ok Ms.Popcorn - thanks for your opinion

So she's basically a slumlord, despite the image she crafts of herself as a holy do-gooder in the press and social media. Got it.

People are delusional, the building is destroyed. Any relationship between the landlord and tenants is gone. The landlord was making an effort to fix the building after the last fire, when it was still a building.

The sense of entitlement these tenants have is a bit hard to fathom.

The building is destroyed. I’m sure that’s not what the landlord wanted. Why is it her responsibility to find housing for the tenants?