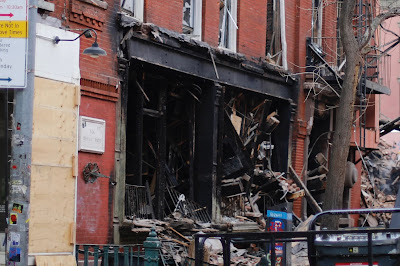 Workers yesterday demolished the remains of 48 E. Seventh St. at Second Avenue... the above photo by Steven shows the fire-ruined Via Della Pace in the morning.
The rustic Italian cafe had been closed here since the fire back on Feb. 10. At the time, the owners were unsure if they would ever be able to reopen here.
Over the weekend, Via Della Pace responded on Instagram to the news of another fire in the building ... with a photo of a heart-shaped cloud ... 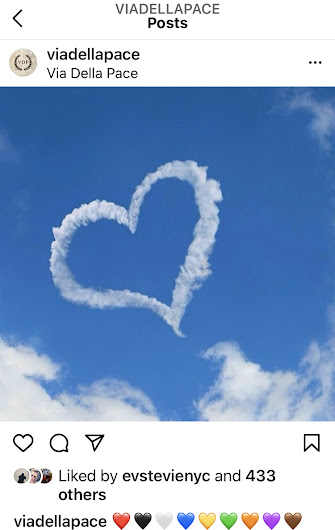 Giovanni Bartocci, the restaurant's co-owner and chef, has made headlines during the U.S. Open for his enthusiastic support of Italian tennis star Matteo Berrettini.
Bartocci posted an emotional video clip on Instagram Saturday as he watched firefighters hose down 48 E. Seventh St., where the cafe first opened in 2001. (In one bit of positive news, it appears he was able to salvage the original Via Della Pace sign from the building.)
Meanwhile, it's very possible that we'll see a return of Via Della Pace one day. Bartocci was on the November CB3-SLA agenda for a new liquor license for 87 E. Fourth St. between Second Avenue and the Bowery, according to public documents filed on the Community Board website. The item was ultimately a scratch from the agenda.
87 E. Fourth St. has been vacant since Cucina di Pesce closed in September 2018.
Posted by Grieve at 5:00 AM

I hope that Via Della Pace does come back somehow.

Gio was also the subject of an NFL films short about how he managed to sneak onto the field at the Superbowl in 2011. I don't remember the title, but if you google "crazy italian packers fan" you'll find it.