'Whoa Christmas' for the holidays 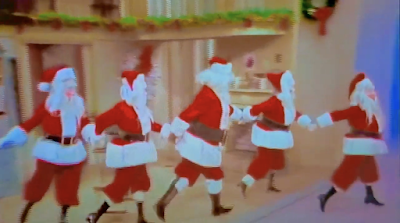 Independent music and theater venues have been among the hardest hit businesses during the pandemic.
To support one local spot, EV musician Matt Hanley recently rented the Kraine Theater on Fourth Street between Second Avenue and the Bowery to film ballet scenes for a music video.
"The money is important, but there's also a need to keep its staff doing something ... that's why instead of a cash donation, I rented the Kraine Theater for a couple of hours," he said. "All in all, the effort employed a dancer, a local videographer, an editor and sent a chunk of change to the Kraine / Frigid NYC."
And the end result of this is the music video for "Whoa Christmas," written by Hanley and performed by the Bedroom Guys... described by them as "a waltz in the spirit of 'The Nutcracker' and the Replacements."
Posted by Grieve at 2:00 PM