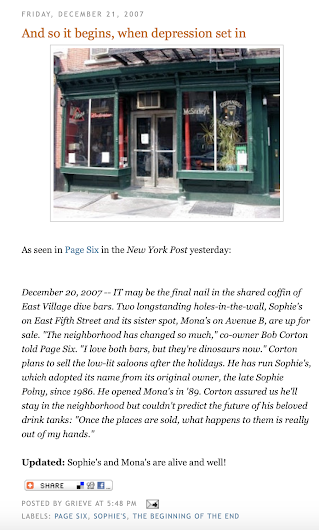 The very first post arrived on this site on this date in 2007. (At 5:48 p.m. on a Friday, no less! 😂)
So a little site history. The post was a cut-n-paste from Page Six noting the possible upcoming sale of Sophie's, the neighborhood bar on Fifth Street between Avenue A and Avenue B. The Page Six item fueled concerns that the bar, along with Mona's on Avenue B, would be closing following a sale... bringing an end to two low-key bars and ushering in something potentially awful.
That was enough to spur some action — a blog!
At the time, the site was called — no kidding — Sophie's Bar Blog. It was intended to serve as a time capsule for Sophie's, a place where I had spent some quality time.
Anyway, as we quickly learned, the bars stayed in the family and are pretty much exactly as they were 13 years ago. (Both Sophie's and Mona's, along with Josie's, are temporarily closed during the Cuomotine.)
After about a month of Sophie's Bar Blog, the site would be retired. But! Stupid Jeremiah Moss, who somehow found Sophie's Bar Blog, suggested that I keep the site going, concentrating on other closures in the neighborhood.
So 30,000-plus posts later, here we are in year No. 13. It's a good time to thank you for reading the site and sharing the journey ... I'm grateful to everyone who has shared a story, provided an idea, sent in a photo, commiserated over the loss of a favorite place, and so on.
I'm especially thankful to the EVG contributors, such as Derek Berg and Steven, who pass along photos, tips and observations on a near-daily basis. And then there is Stacie Joy, who continues to actively document the businesses and residents of the East Village, bringing to life a special group of people and places through her camera.
At this point, I'm not looking too far into the future, focusing on the here and now. So here's to a happy and healthy holiday season!
Posted by Grieve at 5:48 PM

Happy Anniversary, I don't know what we'd do without you!

This blog is vital. Read it every day. Thank you for sharing it and being an amazing part of an amazing neighborhood. Cheers!

Agree with the above! Read it everyday. Thank you so much.

such a great resource and community! thank you for all you do!

Lucky 13 for the neighborhood! The site is a treasure.

This is the first site I check in the morning, or when ever there's a helicopter hovering outside my window because I know the news happens here first!

Congrats on powering through another year, and a doozy at that!

Happy 13th, I check you out every day.

you are amazing! thank you! would love to know about your relationship with new york

EV Grieve is my number one source of news and connection to my fellow East Villagers. Thank you so much, EV Grieve, for devoting 13 years to this endeavor, and thank you so much to Stacie Joy for her wonderful stories and photos.--CC

Thank you so much!

Happy 13th! My favorite source for finding out whatever's going on in the neighborhood and learning more about our neighbors. Thank you all for your work!

Happy Lucky 13th EV Grieve! This is the most Awesome and entertaining blog, I Love it! Thank you and Thanks to everyone helping.

This is an incredible EV resource. I’m so grateful to the work y’all put in ❤️

You are my best friend! xo, jg

I too check the site when there are helicopters hovering.
Checked a few days ago (was it Sat? Fri?) as we were all being buzzed for an hour or so. But there was no word. Who knows?

Back atcha Grieve. You're one of the things that make the EV still worth living in, and that is, for me, the unvarnished truth.

You’re the best, EV Grieve! I check for new posts twice a day, every day, and particularly love the reader engagement by which I mean spirited discussion in the comments. May you long continue and a very Merry Christmas to you!

Happy anniversary and thank you so much for all you have done and continue to do Grieve! The level of effort needed to keep this going is no joke....thank you for this unbelievable service to the neighborhood. And many thanks to Stacie Joy, Derek Berg, Goggla, my upstairs neighbor and chief Ray's corespondent Peter Brownscombe, and all the other contributors that help make this site what it is...an absolutely vital community resource!

There was a robust conversation about it on Twitter. People believe they were filming for “Hawkeye.” I still want to do a post on it time permitting ...

This is the best blog I have told countless people to read it. And both you and Jeremiah were very nice and encouraging towards me by linking my old blog Slumgoddess and telling me to keep going.

I mention to others with some frequency, how extremely detailed and thorough your reporting is. I read the neighborhood news every day with my early morning coffee. Your dedication is very much appreciated as is your commitment (including the time you put in!). Thank you, Grieve.

Thank you Grieve- You make our world a better place!

Happy anniversary! Keep on the good work and thank you for being there every morning.

Thank you for what you do! I read you every day.

EVG, we thank you. What you do (and how) via this blog contributes so much to the quality of our lives as EV (and NYC) residents. Please know there are so many of us out here who appreciate the news you report, the wacky scenes, moments, gems of EV-isms you capture and share, and, through all, your writing, photos, wit and, my god, time -- all the hours you spend, on our behalf to publish EVG. Day after day. Year after year. For 13 and hopefully 13+++ more years to come. Yay.

Thank You for keeping me updated on the neighborhood! It is my startup and home page.

I appreciate you more than I can say. Congratulations on 13, and here's to many more!

As others have said, my first read EVERY day at approx 6am - almost always updated by that hour. Very grateful to Grieve! Hope this blog goes forever.

Thank you. I am a reader who has never commented before, and I just wanted to tell you how much I look forward to reading your posts. Huge kudos for keeping the site going for so long and thank you for making this huge city feel like a small neighborhood.

Everything everyone has already mentioned, I triple that. Thanks for all your hard work, dedication, and passion. No matter how many closings, openings, and ridiculous goings ons your blog helps makes the EV the BEST PLACE TO LIVE. Period. The End. May you reign on! xo

Thank you so much! This is one site I read every single day and greatly appreciate. I feel so much more connected to our neighborhood because of you. Happy anniversary!

wow! Thank You Grieve keep on keeping on - a daily visitor and sometime commenter who appreciates your effort time and diligence you make it look easy! but we know it's not, the Jimi Hendrix of blogs! cheers!

Not in the EV anymore, but I like to keep informed, and the only way is EV Grieve. Happy New Year!

Start every day with Grieve. Then check back several more times. Always more factoids to learn. Thank you. Happy anniversary!

Happy Anniversary. I check the site first thing and throughout the day, every day for years. Thank you, EVG, for keeping us informed and delighted. Long may you run.

And something of a diuretic.

How apt that 13 would fall in 2020. We've had morning coffee together for a decade, and for that I'm hugely grateful.

Thank you so much for everything you and the contributors do to support the quality of life and information in the East Village! Many more years ahead.

Happy Anniversary! Thank you so much for your time and effort. It is very much appreciated.

Thank you for your dedication and hard work! EVG is my go-to local news source. You are a vital part of our community. Here’s to a new year filled with positive change.

I really can't recall how I came across this 'blog' but read it every day! And when I've had to be away for extended times (work/family stuff) it helps me stay connected to my home 'hood and I don't feel like I'm missing out. I really appreciate the posts - they're well written, sometimes I LOL at the wit. I LOVE the hawk sagas (it got real soapy there for a bit)! I can't wait to see the 2021 tree discards - with many staying home, maybe they'll be watered and not ever discarded?!! There's so much I wouldn't notice, but I learn things about the EV too! THANK YOU THANK YOU!

Happy Anniversary! And thank you for maintaining this blog; I've started my day with you for six years.

HAPPY ANNIVERSARY and thank you so much for all the fantastic reporting and photos!

start my day with EVGRIEVE every single day... thanks!

I have strict rules about reading - only at work during lunch and never on the weekends (so I have something to look forward to at work on Monday's). And Bayou isn't allowed to say anything to me about it during that morning coffee either!! Thank you Grieve, you have no equals for daily neighborhood coverage in this city.

Thank you again for the kindness and encouragement! ✌️

I too read you every day and you're invaluable, along with your contributors. Thank you, thank you, and here's to another 13 +, or as long as you can stand to keep us informed enlightened and amused!

Yay! Happy Anniversary and thank you!

Stacie asked to take a picture of some friends and I at the Ave B Flea last month and I said, "Are you Stacie?!" to which she responded the affirmative, and also looked at me like we knew each other, to which I explained, "Oh my God, Stacie Joy, I'm in the presence of greatness! I've arrived!" And I meant every word. You are all the best!

I visit here all the time and so appreciate all of the time and work you put into it. Thank you. Happy anniversary!

I've read your blog almost daily since the beginning. I really appreciate the content and consider it a great resource! Well-written and relevant info with great photos. THANK YOU! THANK YOU!