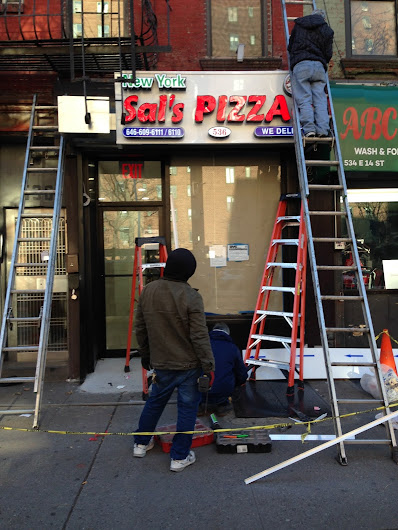 Signage for New York Sal's Pizza arrived late last week at 536 E. 14th St. between Avenue A and Avenue B. (Thanks to Michael Paul for the photo!)
The signage is identical to the New York Sal's Pizza up on 10th Avenue in Hell's Kitchen. Not sure at the moment if this will be a second location or if they are relocating. (Going with new location!) Any slice connoisseurs know anything about New York Sal's?
This will mark the return of a pizzeria with Sal's in the name for the East Village ... going back to the Sal's on Avenue A (RIP 2012 after a long tenure in two different locations ... and not to be confused with the also-closed Fat Sal's on Avenue A).
Posted by Grieve at 5:15 AM

Meanwhile, Muzzarella's continues to be as dark as a coal chute at midnight on a moonless night...

My first Sal's Pizza was on the corner of Broome and Mott. It was owned by two brothers, one was Sal, and the other, obviously, was Vinnie. The pizza was great too.