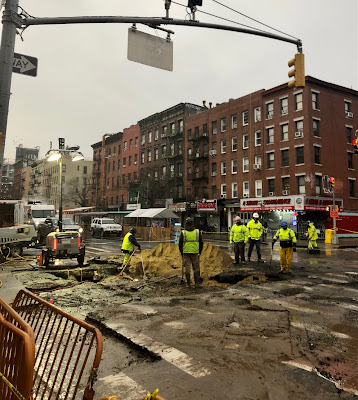 Emergerncy crews are on the scene this morning... making repairs to the ruptured water main on First Avenue and Seventh Street — the second such break in a week.
The break was first reported at 8:30 last night. There wasn't much info on the cause of the break via officials, as local news outlets reported.
Multiple residents/sources (received several WTFs via Instagram DMs) along Seventh Street said the water continued to gush from the street past midnight.
Here are a few photos showing the aftermath this morning on Seventh Street between First Avenue and Avenue A... 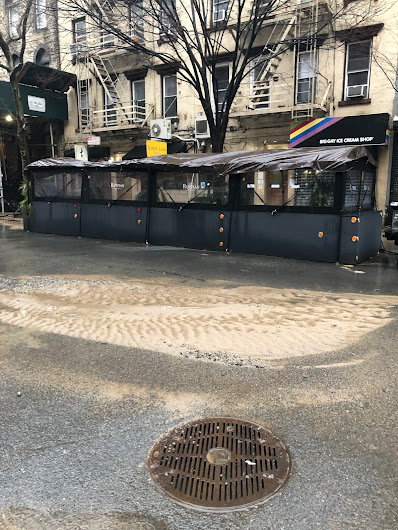 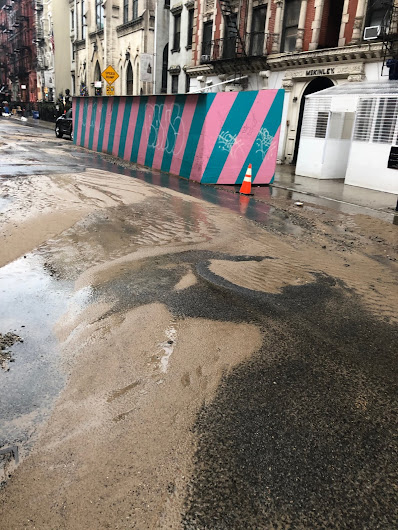 The curbside dining structure outside Ladybird appeared to have received the most damage from the stream of mucky water... 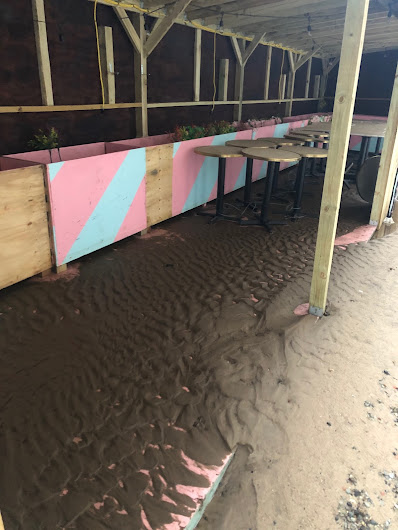 Ladybird, like all of Ravi DeRossi's East Village restaurants, is currently on hiatus. 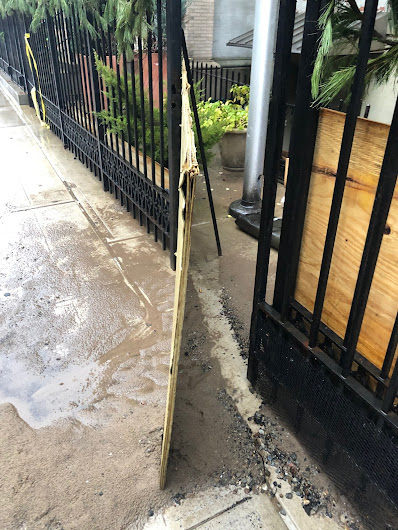 Meanwhile, northbound traffic on First Avenue is being diverted at Sixth Street... (you'd be saving time to turn on Fourth Street, should you be out driving...) 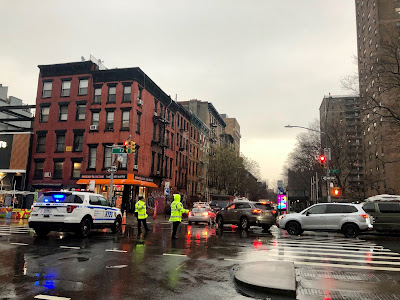 Hard to tell at this hour the extent of the flooding. E7, the deli that debuted yesterday on the northeast corner of First Avenue and Seventh Street, is open this morning. 787 Coffee and Abraço are both open on Seventh Street. There were reader reports of flooded basement apartments along Seventh Street.
Will update when more information becomes available.
Updated 7 p.m.
Wow — the roadwork was completed this afternoon...  and the Avenue is back open... 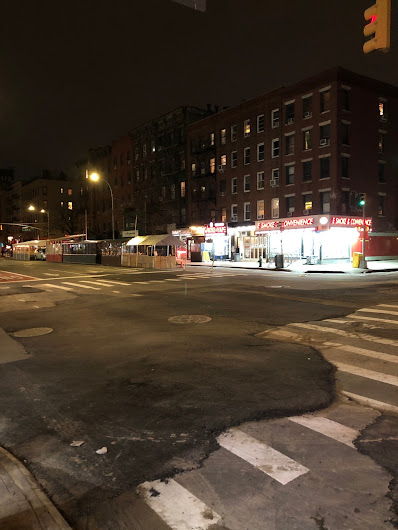 ... and businesses are open along Seventh Street, including Los Tacos, Pylos and Trash & Vaudeville... and there was a service at St. Stanislaus ... 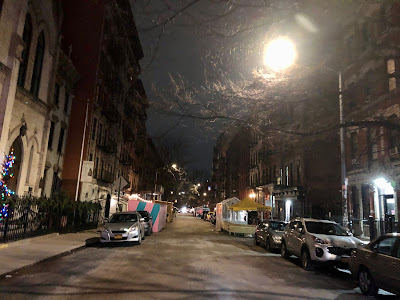 And as for all the reports of brown water...

.@NYCWater is responding to quite a few complaints about this. Yes, likely related to the watermain break. Call 311 with your address so nearby hydrants can be flushed. In the meantime, DEP recommends to run cold tap water for a while to see if it helps flush the pipes.

I just took a walk over there and it did not look that bad it looks like mostly everything is cleaned up and 1st Avenue is back open to vehicle traffic. I did not see any work or repair crews so maybe the repairs have been completed already.

Yes, I just spoke with my super....everyone in the area has brown dirty tap water. I'm at 3rd and C.

My water on 6th street has tasted awful since the last break.

Yes, same on 8th between B and C this afternoon.

Village View posted flyers on each floor of all 7 buildings indicating the discolored water is a direct result of the water main break on 7th street and 1st Avenue and is a City problem and directs shareholders to call 311 for information. Please call 311 if you are experiencing the water discoloration as the DEP will follow up.

Tap water in my building has tasted weird since the first water main break so I have no choice but to buy and drink bottled water for now. I guess my $600 stimulus will be used to buy drinking water throughout the next 6 months!

Everybody should keep a store of water against situations like these. You don't need to buy a flat from Costco. Storing a few liters of tap water in empty (rinsed) 2-liter pop bottles in the back of a closet is effectively free if you drink pop. Just empty and refill every six months. Obviously this supply will only last so long, but enough to tide you over a couple of days can help a LOT.

(If you have a little more money to put into it, you can buy collapsible mini-tanks designed for longer-term storage relatively inexpensively. A little easier to store.)