Another late-night break in, this time at East Village Finest Deli on Avenue B 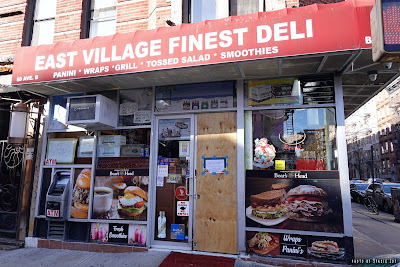 Text and photos by Stacie Joy
Early Tuesday — 3:08 a.m. to be exact — a thief bashed in the front door of the East Village Finest Deli on the southwest corner of Fourth Street and Avenue B.
Manager Anwar Shahbain reports that the perp got away with five tablets, several cartons of cigarettes and some small bills for change in the cash register. 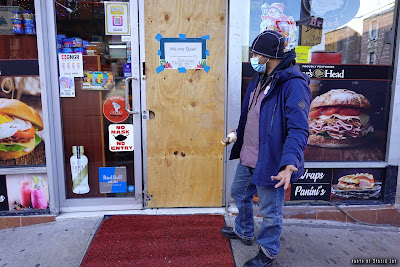 The surveillance videos that the Deli shared show the moment of the break in — the thief, who appears to have at least two lookouts, used the top of a fire hydrant to shatter the glass and enter the shop...
Given this and a previous two break-in attempts here back in June, Shahbain says they will be forced to buy and install a pricy rolldown gate.
Posted by Grieve at 5:00 AM

"Non-violent crimes" are out of control in the neighborhood. Due to bail reform. Our building had someone pry both front doors open with a crowbar breaking the locks.

What the hell is going on!? Where are out representatives and the police? Every day there is more graffiti and more crime.

Interesting to note the guy didn't come prepared with a bag, but just held the stolen stuff in his hands when he walked out.

The police are busy protecting rude marvel film crews from angry residents. They take a break off their strike only where is a heafty overtime pay.

All stores need an alarm system with police on speed dial

It's not just the NYPD - the Transit cops are just as bad. I work near the 125th and Lex subway stop, and almost daily see a gaggle of them hanging out together, gossiping, checking their phones, and completely ignoring the people literally 10 feet away holding the Emergency Exit doors open so others can stream through without paying, or trying to snag someone to swipe them through. The whole PD seems to have just thrown in the towel, all the while still collecting the paychecks our tax dollars fund.

Took a few items, no cash, and didn't bother to use one of the bags at the counter to put them in. Okay....nobody said you had to be smart to be a criminal.
Yeah...Defund the Police.....and this is what happens. You want better protection? More protection? Civility from the PD? Try being civil yourself and not destroy people's lives with generalizations and accusations that come from your emotions instead of the facts. The NYPD is there to help you....but if you call them names and abuse them, why should they? Because it is their job? Maybe you should remember that.