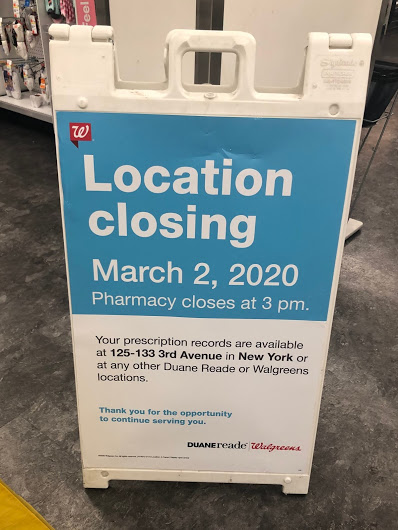 The Center for an Urban Future's 13th annual survey of NYC's national retailers finds the largest overall decline in the number of chain stores, and the third consecutive year-over-year drop in national retailer locations.

Given the pandemic and forced closures for months, news of the decrease may not be a huge surprise.
Here's some analysis via the report:

More than 1,000 chain stores across New York City — or a little less than one out of every seven chains that were open this time last year — have closed their doors over the past 12months, underscoring the immense difficulties facing retail businesses large and small during the pandemic.
Overall, the number of chain stores in New York City declined by 13.3 percent — with 2 percent closing temporarily and 11.3 percent not indicating whether the closures are permanent or temporary. This is by far the largest yearover-year decline in chain stores since the Center for an Urban Future began our annual analysis of the city’s national retailers 13 years ago, eclipsing last year's 3.7 percent drop and the 0.3 percent decline in 2018.
While every borough experienced notable declines in chain stores, Manhattan had the biggest losses, with the number of chain store locations in the borough shrinking by 17.4 percent (of which 2.8 percent were closed temporarily). In fact, Manhattan accounted for nearly half of all chain store closures (520 out of 1,057) citywide.

Other details closer to home: The 10003 zip code, which includes parts of the East Village as well as Union Square and Fifth Avenue, has the third-highest number of chain store locations at 140 (down from 171 last year) in NYC.
Meanwhile, the 10009 zip saw a 29-percent decrease from 2019, shrinking to 22 from 31. And in 10002 on the Lower East Side and Chinatown, there was a 16-percent drop, from 51 to 43.
It wasn't all closures for chains. Popeyes added 11 locations in the past year, including the one on First Avenue between Second Street and Third Street.
You can find the 40-page report at this link.
Posted by Grieve at 5:00 AM

I remember how when Walgreens bought Duane Reade they said that they wouldn't be closing most - if any - stores. Well... that was proven to be the lie we all knew it to be.