Report of a small fire inside the empty P.S. 64 building on 9th Street 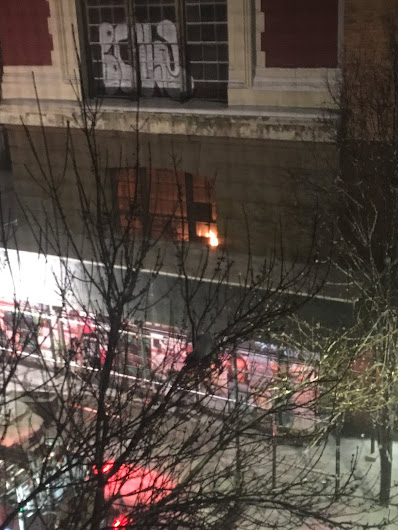 The Citizen app reported that firefighters quickly extinguished the small blaze. Witnesses reported that the FDNY cut a padlock and broke through the plywood surrounding the school between Avenue B and Avenue C to get inside the property.
The fire was said to be contained to the southeast wing. No word on the cause, such as if a squatter was inside the former school.
EVG reader Alta Tseng shared the top photo and this video clip...
Developer Gregg Singer, who bought the property from the city during an auction in 1998, has wanted to turn the building into a dorm called University Square. The DOB continues to maintain a Stop Work Order — dating to August 2015 — on the property.
In years past several local elected officials, community activists and residents have asked for the return of the building for community use. The building became the Charas/El Bohio Community Center after the school left in 1977. The group was eventually evicted when Singer took over as the landlord. It has sat empty these past 20-plus years, causing locals to be concerned about its crumbling façade.
H/T Eden and Steven!
Posted by Grieve at 5:00 AM

I live on this block and that school is becoming a huge problem with squatters. I see people hopping over the fence to that school often and have called both 911 and the local precinct to investigate. Only a matter of time before something worse happens.

It's possible someone was seeking shelter from the storm and this happened.

However, this should have NOT happened AT ALL if the OWNER took care of this property as he agreed to. This should definitely be a cause of alarm for not only the residents near this building, but for the entire neighborhood. After seeing what happened over on 2nd Ave two weeks ago, the issue of this building should be front and center with our elected reps. Where are they?!?!

We will soon lose this building due to the City Government inertial and owner Steiner's waiting game. One of the finest architectural building in the EV and a valuable asset for housing, education, arts center you name it the potential is there but greed and egos will ultimately lead to its destruction. What a waste.

Another "electrical problem" no doubt ( eyeroll) until De Blasio holds landlords accountable for these incidents ( heavy fines? )they'll happen in greater numbers over the next year there's been so many fires in the nabe the last 9 months many of these buildings are worth more gone than rented at fair market price/holding on to the legacy tenants shameful

I have no doubt Gregg Singer is hoping for a Middle Collegiate-style conflagration to take down this poor, neglected beauty. And given the massive numbers of homeless in the neighborhood looking for someplace to escape the winter cold, and their lighting of fires to stay warm, he might get it.

Personally this would be the last place I'd want to squat. This place is totally unstable and getting worse every year. Too bad a fire couldn't have just selectively burned it down. With out effecting anything else. Not pro big selvelopers but this thing is beyond saving at this point and will eventually hurt someone who is inside. Hell my frie d got her and screwed up and jad to take off work for 2 months just from tripping on debris. She didn't know she coukd sue and could t find who to sue at that, but now she never walks on that side. Neither do i.

How is this allowed to continue? The city has to seize this property from Greg Singer and Madison Realty Capital that loaned him the money to hire lawyers to sue the city but not make any repairs. The Synagogue burnt, the Church and corner building just burnt and this has been waiting to happen despite all warnings. The windows are open the roof is cut, people are climbing in and now fires are being spotted if not deliberately set as a final insurance ploy.... Are there any elected officials that can do something? Is Rosie still around?

People seem to have forgotten that Charas was squatted in the first place. Probably the same people who called the cops because someone was inside trying to not freeze. Later, Charas could have bought the building pretty cheaply but did not probably because they believed the city would give them the building and not sell it.

The only way to save this building is to turn it into a mixed use building,a large mansion and offices. Disassemble the building and rebuild elsewhere,in order to preserve its grade a listing. Then the current owner can build anything he wishes.