The Village Voice is returning, and is this a good thing? 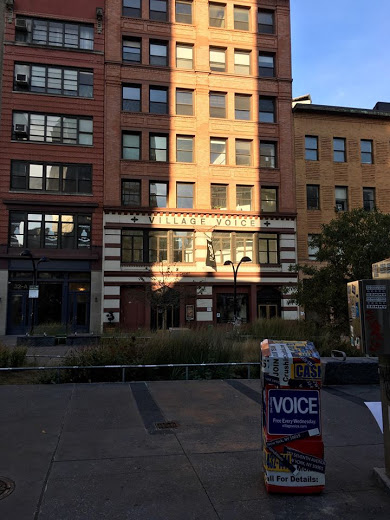 As you may have heard yesterday, The Village Voice, the city's iconic weekly paper that folded in 2018 after a 50-plus-year run, will return in early 2021 with a new owner.
The Times had the story:

Brian Calle, the chief executive of Street Media, the owner of LA Weekly, said on Tuesday that he had acquired the publication from its publisher, Peter D. Barbey. "I think a lot of people will be hungry for this and I'm superoptimistic," Mr. Calle said in an interview.

He added that he planned to restart The Voice's website in January and would publish a "comeback" print edition early next year, with quarterly print issues to follow. On Tuesday he hired Bob Baker, a former Voice editor, as a senior editor and content coordinator. Mr. Calle said he wanted to bring back more former staff members who know the paper's tone. He has not yet named an editor in chief.

The Voice website, which is still active repurposing its archived articles, ceased publishing new content in August 2018 ... this after the final print edition in September 2017 — a 176-page commemorative issue with Bob Dylan on the cover. 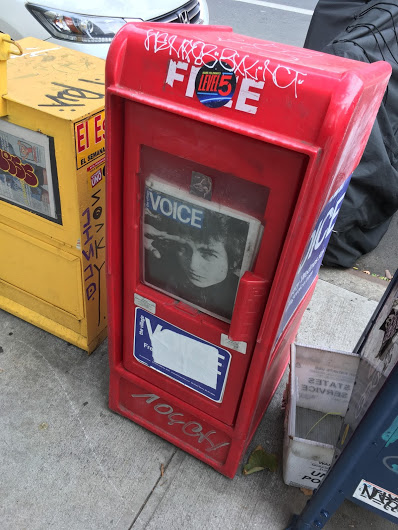 The paper occupied several floors at 36 Cooper Square from 1991 to 2013 ... with a return toward the end of its run.
Early reaction around here yesterday was of cautious optimisim ... and then media watchers who had experience with Calle's takeover of LA Weekly shared some thoughts (H/T Mediagazer) ...

Nothing like the most vaunted counter-cultural publication in America bought by the former head of the Claremont Institute, the West Coast's preeminent right wing ghoul factory.

Is this a better or worse fate than staying dead https://t.co/yTpPDIJHro

I am uncertain about the savvy of anybody who lived through the new LA Weekly experience and thinks, "hell yeah, more of this" https://t.co/erVQLHo1ND

The good news is, the Village Voice is coming back. The bad news is, it’s a branded drop-ship influencer real-estate trust. https://t.co/Pu9Dq1riMO

"The Village Voice Rises From the Dead" is an odd headline. Seems more like "Right-Wing Grifter Digs Up Decaying Skeleton of the Village Voice and Parades It Around, Pretending It's Alive."https://t.co/FOc4L7xJrK

Hey, NYC! Former New Yorker now living in Los Angeles who's here to tell you: this news SUCKS. LA Weekly is a zombie publication now. The whole former staff formed @theLAndmagazine and it's way better. Don't get on board with this version of the Voice. https://t.co/8B3zGGCc6P

it would be great if the Village Voice could be revived with a nice owner who really cared about it, but... https://t.co/QVyXs13qew pic.twitter.com/kTALaRpO9v

If Calle's relaunch looks anything like what he did to LA Weekly, it will surely involve unmarked spon-con, pay-to-play coverage of the company's unnamed investors, and a complete desecration of everything the paper once stood for. RIP Village Voice. https://t.co/6JwRmH3RVJ

Anyone celebrating the revival of the Village Voice hasn’t done the reading of what its new owner did to the LA Weekly. https://t.co/cJTxl6tgyChttps://t.co/q5BeMTYHLphttps://t.co/qpSoch0Db9

I just... Well, I really wish this article would have included literally anything about Calle's unethical mismanagement of LA Weekly. I cannot imagine a worse future for The Village Voice. https://t.co/5guIblmWiJ

Headline accurate in the sense that things that rise from the dead are zombies and should be avoided at all costs unless you can lop off their heads. https://t.co/gRMhOSnYyf

The Village Voice Rises From the Dead, says the headline. https://t.co/wCBlwNzVjC Well, it has a new owner who says he is bringing it back. There is not a word about the business model said owner has in mind, the first question I would ask. A storied past is not a business model.

This quote from @mshalhoup about how the quality of @LAWeekly's content plummeted under Calle is the diplomatic understatement of the year.

Hey NY, hope you like stories about weed and crappy bro-step bands. pic.twitter.com/YE9mKu2jae

A conspiracy theory that I believe without any real evidence is that this cretinous dingus is a cutout for much richer people who want to defile critical alternative media outlets both on principle and "for yuks." https://t.co/mjDGlYLfY5

Previously on EVG:
• Thanks to The Village Voice
Posted by Grieve at 10:00 AM

Reminds me of what happened to AM New York - always a quirky little read with columns by, about and for actual New Yorkers which other actual New Yorkers could write in and comment about, and Metro NY, bought by Schneps Media, which combined into one, and which is now about as exciting, New York-centric and worth reading as a roll of toilet paper. They also bought The Villager, axed Lincoln Anderson, its longtime editor and writer, ditched most of the rest of the long-time staff, and brought in bunch of poorly - if at all - paid generic, personality-free robots who know nothing about what they are covering.

Wow. Well this is disheartening.

So basically, the Village Voice is still dead.

I believe the Latin term for this type of media manipulation is "shitshow." Bring back Town & Village!

The Villager is now kind of a right wing rag. Ugh.

This is the first time I've heard of Bro-Step. Is that a derivation of Crotch-Gaze?

Next we can expect some Proud Boi member to revive the EV Other.

Without the Voice, civil society (defined as what people do together, independent of business and politics) in New York would have been buried forty years ago instead of thirty. We were able to lay to rest the bipartisan attempt to bury this city under incinerator ash with a single cover story in November 1991.
Notably 'civil society' is a term largely unknown to most Americans. It means: if one doesn't do anything to protect his culture, he joins a terminal chorus of victims. Standing on one's hind legs is actually quite good for the immune system. Try it some time.