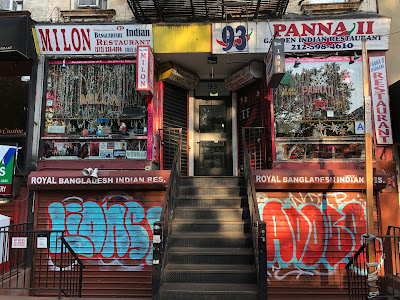 Updated 2/15: While the Milon sign remains in place for now, Panna II has opened for dinner service inside the space
--
As we wrap up the year, there's another restaurant closure to note. Milon, the Indian-Bangladeshi restaurant that first opened here on First Avenue at Sixth Street in 1982, has quietly gone out of business, according to multiple sources.
That might not come as a surprise to anyone who's walked by here in recent months. The gate has remained down since the PAUSE went into effect in March. In addition, there isn't any room for outdoor seating.
Back in the summer, Royal Bangladesh on the lower level quickly grabbed up the curbside seating space, as you may have noticed in the middle of First Avenue after high winds. They've been serving from the back garden of late. (Their hours seem a little unpredictable.)
Upstairs neighbor Panna II eventually reopened for takeout and delivery and later indoor dining at 25 percent. They temporarily closed again when Cuomo's second indoor dining ban went into effect early December.
We had been waiting for confirmation from someone affiliated with Milon. (The phone has been disconnected.) The closest we got was an EVG regular who spoke with a worker spotted entering the locked-up space.
Robert Sietsema at Eater provided history of Milon, Panna II and Royal — who've competed for costumers and the highest electric bill for decades at 93 First Avenue in this post from 2016.
As for Milon's decor:

It takes awhile for your disbelieving eyes to adjust, because the space is hung with thousands of tiny colored lights. Some are Christmas lights, but others are stars, hearts, and red-hot chiles. These descend from the ceiling, as do dozens of banners for seemingly every nation on earth, like a United Nations on acid.

While Milon and Panna II had been catering to the Instagram crowd in recent years, locals still find the restaurants a comfort on evenings away from the weekends. Some have feared that the indoor-dining ban could mark the end of the so-called Curry Row.

Those places are all terrible. I would venture to call them godawful.

Who remembers on which movie/s it appeared?

Curry Row ended about ten years ago. Notwithstanding the sometimes moldy nan bread the basement Taj was my favorite place. Milon and Panna were outstandingly bad.

Who cares how bad the food was at Milon; the window bling was gorgeous.

This breaks my heart. I have lived next to Milon for years walking by it almost every day. I never became numb to all the lights of the 3 Indian restaurants in that location and the banter to get the diners. It will be greatly missed.

I've been to both Milon and Panna. Visually stunning decor and the food was great. This is such a sad shame...

I have been going to Milon for my entire life. My family could afford to eat there in early days because it was so cheap, yet so fun. I brought friends there, dates there, celebrated birthdays there... always been happy there... Fuck. This one got to me.

Milon never quite figured out its delivery game, but fuck if their appetizers weren't the best. I would order like 6 appetizers and call it a night.

This is an extreme loss for the neighborhood and a real change to some of the last remnants of the old spots... fuck

I was in Milon one night some years ago, and spotted John Leguizamo and his daughter there, having a birthday dinner for her. With all those lights, it and Panna II were magical places. Their closing leaves the EV a little darker in more ways than one.

Damn. I used to lived above Milon in 1984. The smell of the frying onions being prepped every day always got my dinner juices going. They were always very kind to me, and the food was better than anything I could make for myself. I guess they just never bent with the changing times.

I live in the building and this really tears me up. All three of those restaurants brought life and atmosphere to that block like no other. People didn't go there for the food - they went for the experience. The night the lights went out in March, it felt like the spirit had left the building. My heart goes out to the staff who were extremely hard working people, most of them immigrants supporting families overseas. This neighborhood is losing so much, it makes me so sad.

200 Cigarettes was the movie. East Village NYE classic!!! So many well-known actors before they made it big.

Customer since 1985 before there were lights. Many many memories.

Just walked by yesterday and the restaurant seemed open, may be a false alarm ?

Milon is closed... Panna II took over the restaurant,, and they opened the space for indoor dining on Friday. The Milon signage is still up...