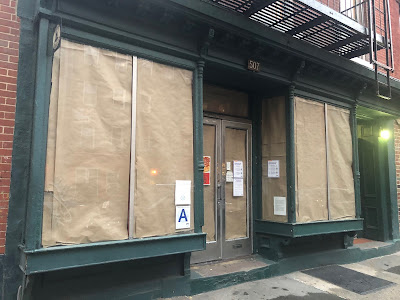 Yesterday marked the beginning of Gov. Cuomo's second ban on indoor dining in the city because of the recent surge in the coronavirus pandemic.
While outdoor dining, as well as takeout and delivery, can remain, several neighborhood bars and restaurants decided to temporarily close down anyway ...  including those places that have ample space for outdoor seating, such as Esperanto on Avenue C at Ninth Street (thanks to Eden for the photo!)... 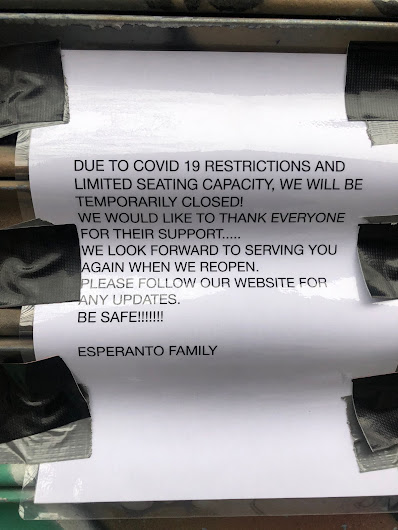 Bars such as Josie's, Mona's and Sophie's, which reopened on Sept. 30, had been operating at the limited 25-percent indoor capacity ... and needed to close as they're without any outdoor space for patrons.
Here's an in-progress look at who has shut down for now (several of these had been noted previously) ... several other restaurateurs were still mulling over their decisions...
• Boulton & Watt, Avenue A
• The Copper Still, Second Avenue
• Esperanto, Avenue C
• The Gray Mare, Second Avenue
• The Jones, Great Jones
• Josie's, Sixth Street
• Lucien, First Avenue
• Mona's, Avenue B
• Otto's Shrunken Head, 14th Street
• Penny Farthing, Third Avenue
• Phebe's, the Bowery
• Sophie's, Fifth Street (pictured at top yesterday)
• Sláinte Bar and Lounge, the Bowery
• Van Da, Fourth Street
• Virginia's, 11th Street
Data that Gov. Cuomo released on Friday showed that restaurants and bars in the state accounted for just 1.4 percent of cases over the last three months while 73.84 percent of exposures were blamed on indoor household gatherings.
As multiple articles have pointed out, many restaurants were already struggling to rebuild their operations after losses sustained from the shutdown of dining during the PAUSE this past March.
--Updated 9:30 a.m.--
The Department of Sanitation has issued a Snow Alert for tomorrow starting at 2 p.m., which cancels all outdoor dining for the duration of the snow alert.
--
The restaurant industry expects more permanent closures if Gov. Cuomo decides to put into place a full shutdown again, which would also ban outdoor dining. (This after restaurant owners had to spend thousands to make their curbside setups compliant with ever-changing city guidelines.)
Still, despite the end of indoor dining for now, many local bars and restaurants vowed to carry on ...

And because of the threat of snow, outdoor dining has been suspended starting Wednesday. What a mess.

You can add Slainte, Gray Mare, Bull Mccabes, and Coopers to the list of places closed until TBD.

Cuomo’s going to lose his presidential bid by making an enemy of small business.

I am worried about potential electrocution issues related to these outdoor spaces. So many places near us are now running wires overhead from the buildings to the outdoor dining structures. If those wires go down on the sidewalk, it could be bad. Does anyone know if they are required to take that stuff down when it rains or snows?

Cuomo is killing off the restaurants in NYC.

Sad to add another one to the list - Virginia's. This place really had a beautiful setup and an incredible burger. Looking forward to seeing them in 2021 - fingers crossed.

If you can go to Home Depot, Macy's, B&H, Lord&Taylors, etc, why can't you go to a restaurant? Because Cuomo said you can't.

Even the popular vegan chain By Chloe has filed for bankruptcy, joining Ample Hills Ice cream, Le Pain Quotidien, and Maison Kaiser among other well funded (and often a bit too precious) food chains that have closed. Before the pandemic, the By Chloe location on Bleecker and Macdougal was always packed, now it’s all boarded up. The point is that these operations had tens of millions of dollars in backing, and they still could not survive. I’m pretty sure that the family members working at many of the independent places are not getting paid, they are just trying to hold on until this is all over. If popular locals like Jules, Odessa, Gem Spa and Haveli couldn’t survive during better times, it’s hard to see how others will make it through the long winter months.

@6:55 You can go to stores because shopping doesn't involve removing your mask! Eating indoors means breathing, unmasked on people for an extended period of time. Cuomo may be wrong about a lot of things, and an a**hole to boot, but this makes sense. Also, Lord&Taylor disappeared before COVID hit.

I am worried about how some of these outdoor dining structures are going to hold up in the snow. I didn't expect the first storm of the season to hit so soon. I hope they don't fall apart after all the money spent to build them.

This is bullshit, the data doesn't back this decision.

@8:24 Cuomo's own statistics shows that ALL dining causes 1.45% of covid transmissions. How does it make sense to shut down indoor dining in Manhattan that has one of the lowest positive rates of 2.5% and keep it open in other areas of the state where infection rates are over 5%?

The electric heaters need to be removed for the snow alert. Not sure about the wiring itself.

Thanks for this list, Grieve. Have reflected the temp closings on What's Open EV?, and will be updating based on your additions.

I was in a take-out place a while ago and a man came in looking for a place where he could eat indoors, presumably to get out of the snow storm that's coming. He was told no indoor dining at all, so he left. I had to wonder where anyone can go to get out of the cold, even just briefly. There's nowhere.