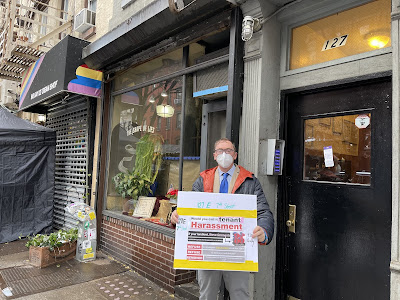 Updated 12/28:
The management company has replaced the toilet with a working one, and did some cosmetic paint cover up in the bathroom. However, the tenants say there are still 16 outstanding HPD violations to address.
Thomas Hasler lives at 127 E. Seventh St. between Avenue A and First Avenue.
Hasler, a public high school teacher who has been working remotely, and his roommate, Brian Kenner, have not had a properly working toilet since Nov. 12 ... the latest indignity on behalf of the building's landlord, Steve Croman ... which prompted Hasler to launch a one-man protest outside No. 127 on Sunday.
"I will go out every day after I finish my remote teaching to let the neighborhood and folks in our building know," Hasler told me via email. 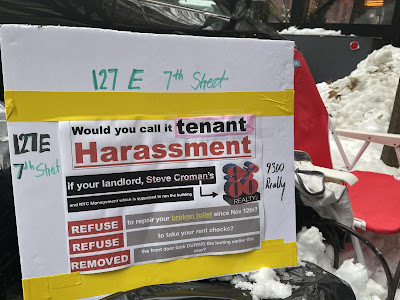 Aside from the toilet, Croman's management company also removed the lock from the building's front door at the height of the looting this past summer, Hasler said. (The reason given: "There were complaints that packages can not get delivered inside.")
Croman was released from jail in June 2018 after serving eight months for mortgage and tax fraud. In a separate civil case with the AG's office, Croman agreed to pay $8 million to the tenants he was accused of bullying out of their rent-regulated apartments.
As part of a settlement agreement, Croman agreed to relinquish direct control of his 100-plus rental buildings — including 47 with 617 units in the East Village — for the next five years. ... with NYC Management — a division of the Besen Group — serving as the property manager.
According to a published report at The Real Deal in October 2019, "The notorious landlord is back in action and hasn't changed his ways" since his release from behind bars.
"Harassing rent-controlled tenants in our building has a long history," Hasler said. "The goal is to get us out and to convert the last remaining units into market-rate units. That's it in a nutshell."
Kenner, the leaseholder on the apartment, has lived in the building for 36 years. During the holidays, he has been working seven days a week.
"So Thomas was bold and fearless enough to organize himself," Kenner said. "I will gladly participate in anything that takes place after my work is done for the day."
According to the two tenants, NYC Management reps have stated there is a "process" to go through to replace the toilet, now scheduled for Christmas Eve. (After seeing our tweet yesterday about this, local City Councilmember Carlina Rivera's office contacted Hasler as well as the AG's office.)
However, the roommates aren't expecting much. "The date seems pretty meaningless," Kenner said. "Who is there to enforce this date? I believe [their] style would be to promise 'relief' on the day before Christmas, and then not show up."
And how have they been making do these past seven weeks?
"So we use buckets to flush the toilet with hardly any water pressure ... while the market-rent tenant below us who was flooded by our broken toilet on Nov. 11 or Nov. 12 got his damage repaired immediately," Hasler said. "So you end up feeling powerless and harassed. And they think they can get away with it."
Posted by Grieve at 5:35 AM

It's annoying but the teacher can afford to pay a plumber $350 to install a new toilet.

Why don't they hire someone to fix the toilet and then deduct the cost from their rent?
I know someone who lives in an EV apartment that once had a window smashed by a brick thrower in February. The landlord refused to replace the window, so the tenant withheld his rent for three months. The landlord sued him for non payment. The court ordered him to pay--minus one month of rent.

I’d use that bucket to poop in and then dump it in the hallway !

Croman learned nothing from his first stint in prison, so maybe it's time he gets locked up again, but this time in a cell with just only a 5-gallon bucket for a toilet, emptied every other day. Maybe no toilet paper, either. Let's see how he likes it.

We don’t know his financial situation, so it’s a bit presumptuous to assume he may have $350 (or whatever the true cost of repairs is) readily available to replace his toilet. It’s a reality that many New Yorkers are living paycheck to paycheck.

Re 2:12
If you read the article you would know he is a NYC teacher. So it's not "presumptous" to think he can afford a $350 dollar toilet.

Is he working with neighborhood heroes Cooper Square Committee? They have worked with Croman buildings before and certainly saved so many of us from being harassed out of our homes. https://coopersquare.org/

The laws in New York regarding slumlords need to be updated. Scum like Croman, and Jared Kushner, and Terrance Lowenberg etc. should be jailed for life, no possibility of parole, for the way they abuse their paying tenants. All of their buildings should be legally confiscated and the apartments should be gifted to the existing tenants.

I hope they are withholding tent

Have been a Croman tenant for over 20 years. One tactic he uses to evict tenants is to deny basic services like working faucet or toilet until tenant hires someone to do the work. Croman has taken many people to Housing Court and had them evicted because they did work in their own apartment in HIS building. One woman was evicted for finally painting her own apartment which hadn't been painted in 20 years.
Be careful, and if you decide to foot the bill and have the toilet replaced on your own be sure to have a signed statement from Croman giving you permission for the work and for taking it out of your next month's rent.
And keep letting the AG know your circumstances.
Good luck.

You must not know the laws of rent regulated tenants ! If this tenant would do his own work or hire someone to do plumbing, especially plumbing, the landlord can then take you to court to evict you !!

I’m about to give up faith and hope. Steve Croman has harassed me since he took over my building. Every year, he tries to evict me for frivolous reasons and repeatedly comes into my apartment without permission, even when I was naked once. I’ve spent thousands on lawyers every year and can’t continue living my life like this. Almost every two years, I write Andrew Cuomo, Bill DeBlasio, and Leticia James a letter and email with no assistance. If anything, his tactics have become worse than before after coming out of jail.