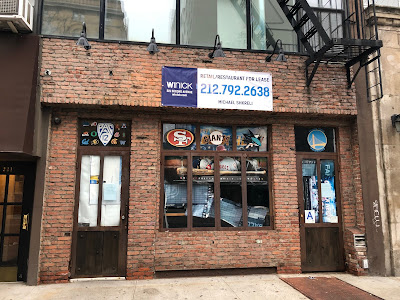 Finnerty's will not be reopening at 221 Second Ave. between 13th Street and 14th Street.
A for rent sign now hangs outside the sports bar and self-described "party destination" featuring rent-a-keg service.
The bar closed in March for the PAUSE and never reopened. There is not any message about the closure on their website or social media properties.
Finnerty's, which opened in 2009, was an alleged Bay Area sports bar, where fans could watch games featuring the 49ers, Giants, Golden State Warriors or San Jose Sharks. Snubbed: the Oakland A's (and the Oakland Raiders before they moved to Las Vegas).
This makes two like-minded bar closures on this block... Professor Thom's also never reopened after the PAUSE... 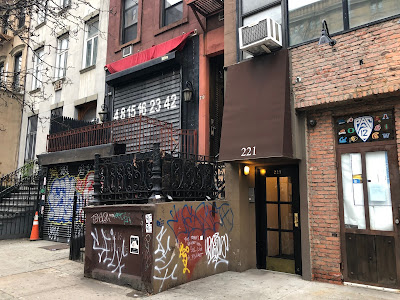 Email ThisBlogThis!Share to TwitterShare to FacebookShare to Pinterest
Labels: closings 2020, Finnerty's, for rent

No Santacon
This douche bar closed

So I guess more unemployment is good? I dont understand some people getting joy out of the slow painful death of the entire city. When the city is broke and has no money for programs and services will you be happy?

And, FWIW, though I'm not the original commenter, the closing of bars like these is no loss to this neighborhood. I'm sure all the owners of these places have tons of $$ in their bank accounts, and if the owners cared about their employees, they were free to help their employees financially.

Yeah, I mean, that's kind of the deal with some people on this beat (although not the author of this blog... but definitely a few regular anon commenters). Annihilation is a good thing to them if it clears out the people they don't want to see taking over the neighborhood, it really must remain exactly as-is from 1980 or so.

The East Village is more or less a split neighborhood now, you couldn't stop people from moving on or moving out (although the manner & speed at which some were PUSHED out is despicable) and now there are new people here & they conduct themselves in a way that is similar to what people do in every city. And you've got some longtime residents publicly hoping that COVID-19 drives out "gentrifiers" so that the city can get its "character" back. Apparently the cutoff for character is about 20 years ago. If you're newer than that, they'll have a parade when you leave.

I believe most people know better. Nobody's thrilled about condos appearing where neighborhood haunts used to be, but it's a whole other thing to be gloating about bars that have been open well over a decade getting smashed by the coronavirus pandemic... and I'm grateful for those who wish to see us all through this, and not promote a messed up kind of economic Darwinism.

Let me guess- you live in a rent stabilized apt, work for a 'nonprofit ' and have never run a business? Most of these places are actual small businesses. They dont have tons of money and cant afford to pay their employees. Frightening how clueless some people are.

Exactly, thank you very much for voicing this (accurate) opinion that often goes unsaid here.

I love all these folks who slam the young crowd for living their college years/ young professional career the same way the those criticizing them lived theirs years ago. Because you guys were such good people when you were in your early 20’s right?

Seeing businesses of any type close is sad. But I’m sure a lot of these businesses that are closing right now will be back beginning mid- next year. The empty bars are going to be filled by new bars. That’s the way these spaces were built for. So for the folks who don’t like the nightlife of EV, brace yourself because it’ll be back. Don’t like it? Pack up and move upstate. Because it’s never going to change, whether you like it or not lmao.

Wow 7:01, make up a bunch of statistics and you have proven your point. I can play too: the neighborhood does not need 300 bars to be economically viable. It only needs that many bars to pay the inflated commercial rents that the bars created. The East Village could survive just fine with 50 bars, unless you think that the nightlife is the only life.

I find it interesting that many of the bars and restaurants that have closed in the EV and Union Square have other locations that have remained open (at least for the time being). Perhaps those open locations have lower rents or more amenable landlords. But as likely is that the downtown locations are dependent on transient customers- tourists and students- not residents. People residing here don’t need 600 bars and restaurants.
I don’t oppose bars and restaurants that cater to the neighborhood, even those high end places that cater to our newer, wealthier incoming neighbors. The bad behavior, the over-saturated bar scene are stemming from the influx of nonresident partygoers and the bars that are catering to them.

Well we will find out soon enough. Is 'surviving' a good goal for a neighborhood?

Not the original poster...Although the statistics may be made up, the thesis is salient and becoming a reality. Watch out, lest we return to the days of burnt out buildings and shooting galleries

From all the many douche bars around, this one annoyed me less, maybe because it was nice to see so many SF people, instead of the usual generic Ohio ones, I'm used to see at these kind of spots.

Can confirm. Lived in the building above this far for years and it’s the nicest / least douchy bar on this strip of 2nd Ave