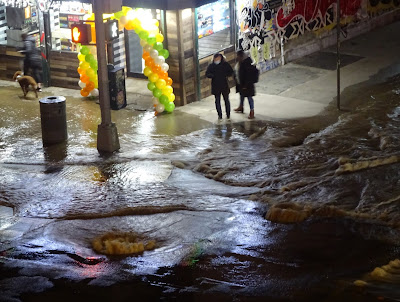 One week after workers repaired a broken water main on First Avenue at Seventh Street, another rupture has occurred tonight, flooding the street all over again...

It took workers two-plus days to clean up the broken pipe last week... which forced several businesses to temporarily close and residents to lose their water service.
Here's a clip via EVG reader Raquel Shapira ...
As you might expect, northbound traffic on First Avenue is being rerouted. The city had also just reopened Seventh Street between First Avenue and Second Avenue on Monday for the first time since the devastating fire on Dec. 5.
Updated 9:45 p.m.
Photos via a tweet by Jake Offenhartz at Gothamist shows the water rushing across Seventh Street to Avenue A... 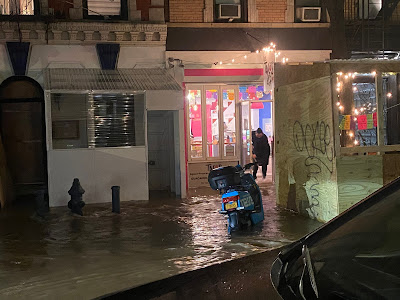 Updated:
More footage from along Seventh Street near A, where the water continues to flow from the point of the break... flooding the outdoor dining spaces (again)...

Residents have reported the city has shut off the water to the buildings in the immediate area... and several residents on Seventh Street were spotted leaving their apartments with suitcases...

Updated:
As of 11 p.m. the water main had not been shut off for unknown reasons, and water continued to flow along Seventh Street toward Avenue A... Jackflashnyc shared these photos... 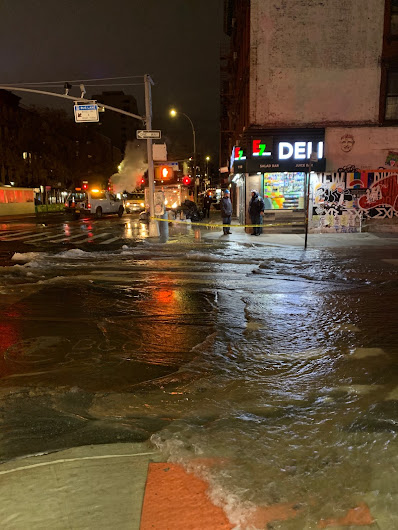 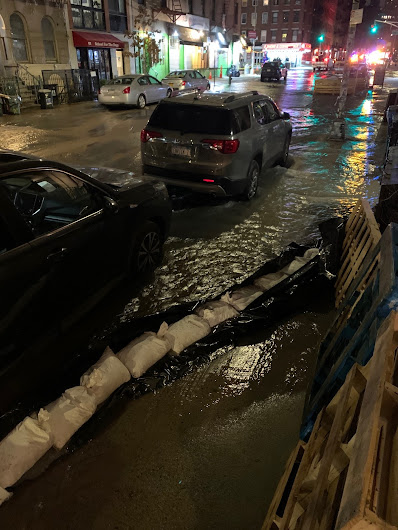 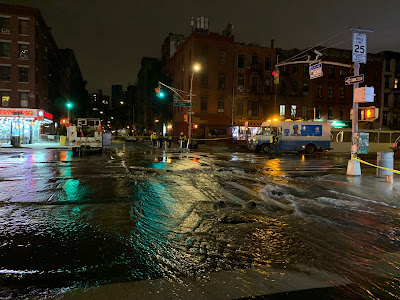 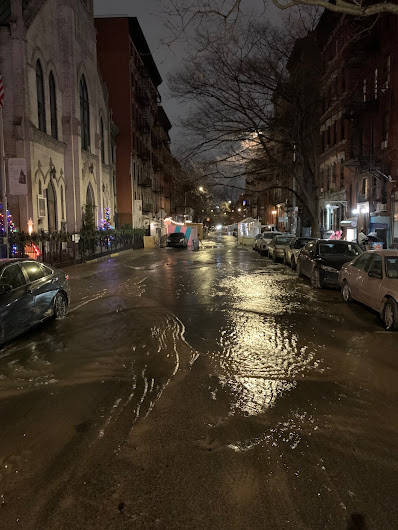 Top photo via @jeremoss
Posted by Grieve at 9:23 PM

WTF is happening to our neighborhood? It's one disaster after another. It's too much. 2020 is too much. Hope everyone is okay and no businesses were severely impacted.

That's the block in Naked City, and Jack Klugman can't leave the block, because he is afraid that his wife is seeing a mob guy, who will kill him, and his wife (played by Joanne Linville, the Romulan commander on Star Trek) suspects him of seeing a teenager. So it's not rivers of water that's the problem, but rivers of distrust!

E 7th must be the dark side given the recent events and the gas explosion five years ago with 121 Second.

Death & Company the cocktail bar on E 6th towards Ave C makes a fitting name. They'll probably didn't want to get too near from the source hence E 6th as their location.

If they can't burn us out, they will flood us out. Worry not, the real estate lobby will reap the rewards!

As much as I hate the mayor, local officials and DEP should be held accountable for this first - it’s their responsibility.

Death & Co. is between Avenue A and First Avenue. They opened on this day in 2006.

The water looked surreal when I went by! I could have canoed home. Is that a real word?

I believe it’s kanuuued but I knew what you meant!