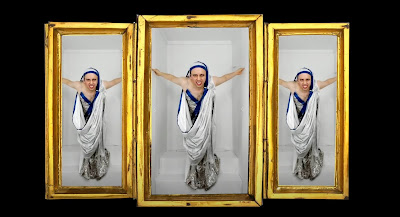 After the pandemic shuttered theaters back in March, Joshua William Gelb transformed a 2' x 4' x 8' closet inside his East Village apartment into a white-box theater.
This apartment therapy marked the beginning of a creative endeavor titled Theater in Quarantine.
On March 30, Gelb and his collaborators began releasing pre-recorded studies in movement, camera orientation and perspective — building toward more complex theatrical experiences ... in late April, they premiered their first live-stream performance — an adaptation of Kafka's "The Neighbor," which was followed by an unauthorized edit of Beckett's "Krapp's Last Tape" and collaborations with artists like Scott R. Sheppard ("Underground Railroad Game"), Nehemiah Luckett ("Jazz Singer") and Ellen Winter ("36 Questions").
Tonight sees the Theater in Quarantine's world premiere of "I Am Sending You the Sacred Face" by Obie Award-winner Heather Christian,  a one-act musical that charts the spiritual journey of Mother Teresa from Gelb's closet.
The 40-minute work features choreography and additional direction by Katie Rose McLaughlin, and is presented in partnership with Theater Mitu's Expansion Works. Additional live-streamed performances will take place on Thursday and Saturday night at 9.
You can watch live tonight at 7 or 9 on YouTube, where all performances are archived.
Posted by Grieve at 5:30 AM

Email ThisBlogThis!Share to TwitterShare to FacebookShare to Pinterest
Labels: Theater in Quarantine

These performances happen LIVE and are engrossing and groundbreaking. I tune in regularly.