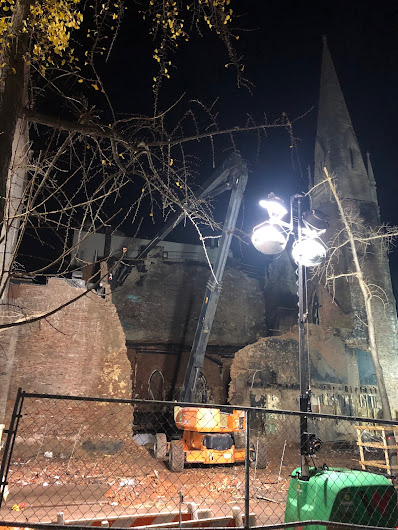 Here are the latest developments about the Dec. 5 fire that destroyed the southeast corner of Second Avenue and Seventh Street. (You can find all of our coverage via this link.)
For starters, on Friday, the FDNY said that faulty wiring at 48 E. Seventh St. was to blame for the six-alarm fire that destroyed the neighboring Middle Collegiate Church. An FDNY spokesperson told 1010 WINS that the fire has been deemed "non-suspicious."
Myles N. Miller at NBC 4 reported that witnesses in the area first started smelling smoke around midnight. However, the first 911 call didn't come in until several hours later when a cab driver saw flames rising from No. 48.

The Fire Marshall has concluded their investigation, but we do not yet have the official written report. What we've been told is: It has been confirmed that the fire originated in the building to our north and the cause was electrical in nature.

Over the weekend, workers started removing the church's east-facing (back) wall in order to stabilize the site, according to the Rev. Jacqui Lewis, senior minister at the Middle Collegiate Church. (Photo below via Steven) 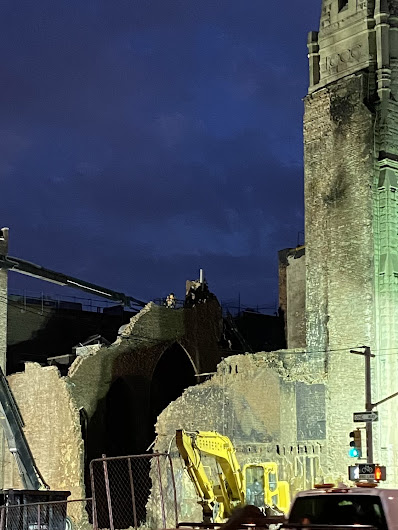 We will have more to say to our community and to the press once we see the official report. In the meantime, we offer prayers of thanksgiving that there were no fatalities.

In some positive news, the steeple remains intact, which is where the New York Liberty Bell had hung in the belfry. The bell appears unharmed ...

As work continues to stabilize @middlechurch, our engineers have found that the church’s historic “New York Liberty Bell” was not damaged during last week’s devastating fire.

DOB engineers remain on site to monitor & assess the stability of the structure. pic.twitter.com/v5BPwuIUGl

Our bell will ring again, and our love is still ringing. pic.twitter.com/BLofkL4HmT

Some history of the bell via the Times:

Buildings Department officials said that they continue "to monitor and assess the stability of the remaining structure of the church, including the façade and the steeple, while cleanup operations are still underway."
In one other development, Gothamist reported that there was a small fire at the scene on Saturday morning.

Around 9 a.m. Saturday, "something sparked up and the units that were on the scene did what they were supposed to do, which is just put some water on it," said a FDNY spokesperson who declined to give his name. The flare-up was so minor that the FDNY personnel on scene did not transmit a fire alarm, the spokesperson said.

Meanwhile, Church officials have started the rebuilding process (donation link here) ...
Posted by Grieve at 5:50 AM

I find it incomprehensible that there was an earlier electrical fire at 48 East 7th Street and adequate precautions were not taken to prevent another one. Con Ed will shut off the gas for months if there is a gas leak, don't they shut off the electricity when there is faulty wiring? Obviously faulty wiring. And were there smart smoke alarms in place for any early warning? You can buy a Google Nest Protect for $120.

The fire might not be suspicious (intentional), but the behavior is troubling.