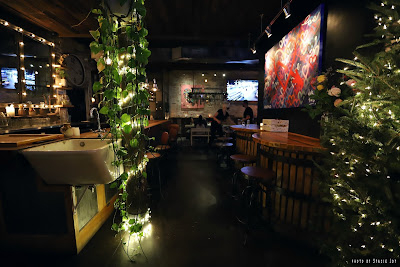 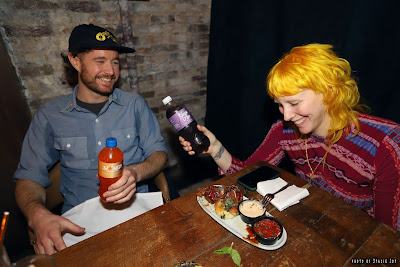 Owner Chris "the Pizza Pusha" Barrett is understandably concerned about giving out his exact address, although he is quite forthcoming about other details of his yet-to-be-legal business that opened here earlier this fall. (He has been in business for several years, with a location in New Jersey that previously offered a sit-down service as well as several delivery outposts in the five boroughs.)
I'm there for the next-to-last night of indoor dining before the city shuts down once again, in hopes of slowing the second-wave spread of COVID, and the place is booked at its 25-percent max capacity, mostly with couples like Sara and Glenn for a date night, and small birthday celebrations. The patrons appear to be happy (even before the THC-laced food and drink are consumed) and relaxed, speaking of a difficult year and a desire to "let loose."
Everything felt somewhat illicit, probably due to the blacked-out windows, the "are you on the list" check-in, the illegal consumption of cannabis, and the fact that it's indoor dining on its last night for now. Plus, there's the small private smoking chamber, where people enjoyed prerolls and other smoking materials.
Chris is no stranger to controversy, being combatively arrested as recently as two weeks ago, and granting media access to Vice, as well as hosting parties for rap notables and Instagram influencers. Chris, a Bensonhurst native, mentions he's being profiled by New York magazine for an upcoming issue as he rolls a giant joint. He is seldom seen that night without one in hand. 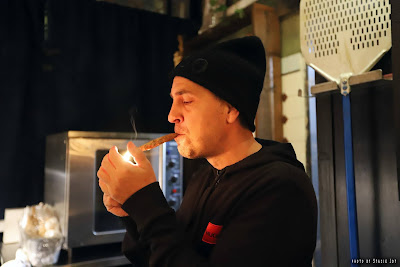 I've arrived ahead of Sara and Glenn and am shown the restaurant's kitchen, food prep areas, cold storage, basement and the office, where delivery orders are being rung up at a startling clip. 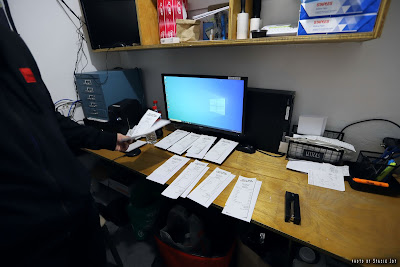 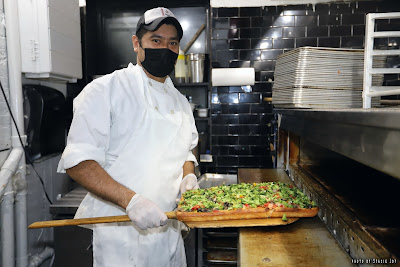 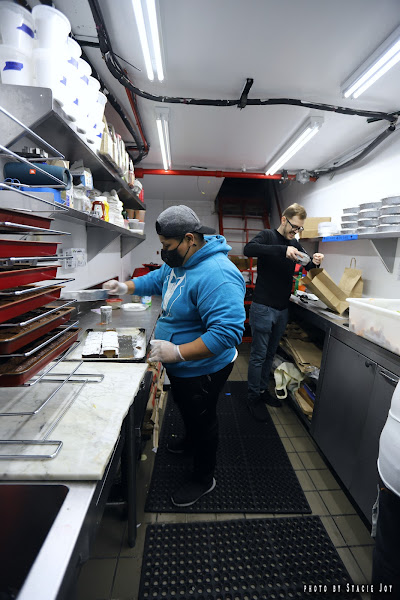 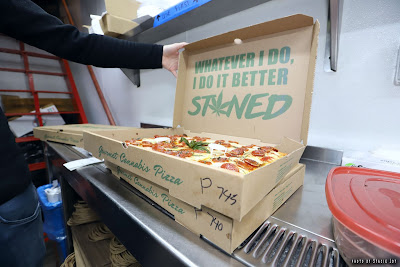 Chris and his manager of operations Niko Santos introduce me to the staff and I ask about their comfort level in having me take pictures for local media coverage. 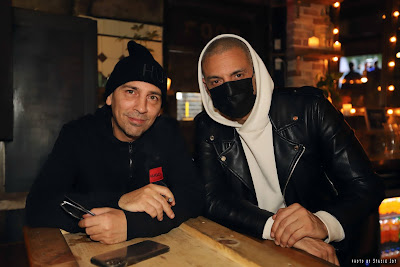 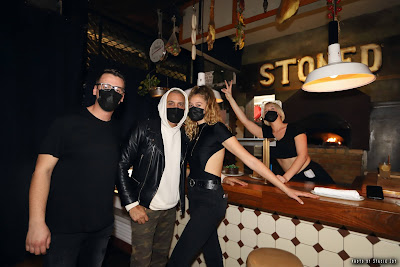 I am shown the garlic ganja knots, with 100mg of THC (the active ingredient in marijuana) per order of six pieces, and sticky-icky wings, a chicken lollipop dish with 150 mg THC per order. The chef points out the entrees: vegan pizza, the medical margarita pie (vegetarian), as well as the wildly popular sativa sausage pie.
I watch as guests arrive and undergo COVID screening rituals — temperature checks, log-in of personal information for contact tracing, hand sanitizer being dispensed before people are led to their seats. Staffers are masked, and explain how the process works.
It's a two-hour unlimited or all-you-can-eat tasting menu, with appetizers, entrée and dessert and well as non-alcoholic beverages (including choices like Sour Sprite, Orange Kush, Canna Cola), all made with marijuana. Baseline cost is $100 per person, with add-ons available, like the popular birthday cakes that I see lined up ready for the night’s celebrations, or prerolls, tinctures, and cartridges.
The meal ends with a dessert platter, canna cannolis, Girl Scout cookies, and brownies, along with three flavors of gelato (flavors rotate daily). By this time, everyone appears very high, there is a lot of laughter, and folks do not seem to want the evening to end.
"The pandemic has been hard on people, everyone is stressed out, worried," one Harlem-based couple tells me. "This was a nice night out for us, before a grueling work week ahead." 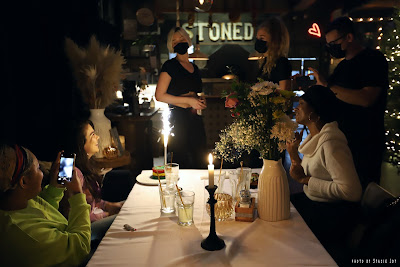 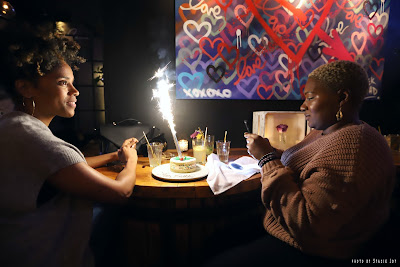 You can keep up with Stoned Gourmet Cannabis Pizza on social media here. Although the restaurant is currently closed due to the Cuomo-mandated shutdown, delivery options are still available, and Chris hopes to reopen for indoor dining when it is safe to do so. 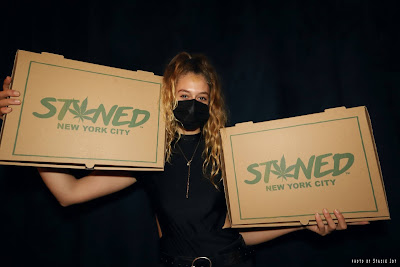 Not down with this at all. Lets violate EVERY law and rule while we're at it. What about the residents in the Building. Do they count?

All my dreams realized.

this is awesome, can't wait to try it once we get back to indoor dining. great article as always Stacie!

are my eyes red??

This doesn’t hurt anyone, permit patty

This space looks like the interior of a sushi place I used to frequent years ago. I will definitely give it a try when restaurants are open again for indoor dining.

What about the residents in the building?

I hope NYS/NYC decriminalizes marijuana soon, so that this place can flourish.

What consenting adults do (drugs or otherwise) should not be anyone else's concern.

(Unrelated, but I hope that we decriminalize sex work as well; I would not be against the opening of a legal brothel in NYC.)

Damn, just when I decide to quit the mary jane.

I used to deliver pot for the Pope of Pot back in the late 70s and early 80s and he did a big interview with Howard Stern and gave out his delivery number on Stern's show. A week later I get busted doing a delivery the Pope sent me on to an undercover on Houston St. At the 7th Pct. I ran into the Pope and all his other workers who the cops had rounded up. I hope the same thing does not happen to this place but judging from some of the comments some people are "dropping dimes" as we speak.

So don’t be down with it keep it moving. it seems like they aren’t hurting anyone. Let’s worry about the sudden Heavy drug use and crime in the East village that seems more of an issue to concern ourselves with!!

I was in LA and the pot stores are open 8am to 10pm 365 days a year. This is the green economy. Why is NYC so behind the times? No legal weed or pot stores? Las Vegas has drive through pot stores.

Sorry but I just have to ask - what is with the crazy high dosages at all these edibles purveyors?

Honestly i read shit like this n it makes me sick to my stomach. Why? I just dont understand why people have so much to say about how other people live or do in there life. Wtf life is so short evil shit is happening everyday. Why not mind your fucking buissnes and use all that negative energy turn it into positive energy on making your self a better and happier person...... Just saying.....
Now is covid ...
Whats next???

My ex best friend got this pizza for her B-Day, she got it all instead of the snacks.

All I can say is, it was a discreet transaction, we got the food out a tinted minivan, no words was said and we was on our way.

Can we smoke inside while we wait for our food??

SOOO let me get this straight, CAN WE SMOKE INSIDE THIS FACILITY WHILE WE WAIT FOR OUR FOOD????

Why you judging so hard it’s a great business idea

Is this place open .