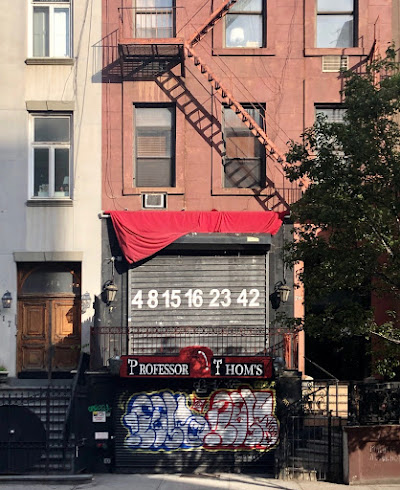 Several tipsters have claimed that Professor Thom's will not be reopening on Second Avenue between 13th Street and 14th Street.

The sports bar, which showcases Boston teams, has been closed since mid-March at the outset of the COVID-19 PAUSE. Meanwhile, the bar's website domain has expired and the phone has been disconnected. An email to bar bounced back as undeliverable.

A retail listing for the two-level space also arrived in mid-May, with an update on Monday. The broker describes it as a "fully vented commissary kitchen" with 4,000 total square feet.

Professor Thom's opened in 2005, and became known for hosting "Lost" viewing parties during that era of TV.
Posted by Grieve at 6:09 AM

Can't say this is any loss to the area. I'm sure another bar will open in the same space soon. And we'll still have too many bars and too many drunken bro's.

I'm surprised this place was known for anything other than a place to get drunk.

I am all for less bros in the EV. They will have to search for another neighborhood to terrorize.

Not sorry to see it go. Tried to have my 21st birthday here - the night before I turned 21 - literally 2 hours from it (who wants to party on a Sunday?) Not a drinker at all and wasn't planning to order a drink, but got carded after getting inside and turned away by the owner. Ruined my night, cried outside and the bouncer gave me a hug. Meanwhile, my younger friend got in without a problem. What a dickhead.

A step in the right direction. Period.

Since it was Boston affiliated, I say good riddance.

Good riddance to any frathole

This is so sad, I have so many great memories of this place, it was like my home away from home (yes I am originally from New England). I even met my fiance in this bar!

RIP to a real one. After the Hairy Monk and now this, hard times for Boston sports fans.

LOST and Game of Thrones upstairs were a blast. I'll miss ya, Prof Thoms.

This was also a favorite hangout and meetup for tumblerers during tumblr's heydays--they think they were all that and all. If you ever want to see gentrification in action and motion, hangout here during the late aughts--they probably thought that the East Village was all about them, didn't they, didn't they and they saw clouds in their brewskis, clouds in their brewskis.

Superior to the average bro bar (admittedly a low bar) but hopefully inferior to whatever comes next. When those numbers are scrubbed from the gate the phenomenon that was the first few seasons of "Lost" will slide a little deeper down the memory hole. The nachos and the Ann Arbor-style "Blimpy" burgers will be missed.

Huh, I never knew what those numbers were until now. Oh well.

End of an era. Wow

Will miss this bar. I too am a transplanted New Englander & have many fond memories watching games & enjoying nachos & Harpoon. Good luck wherever you go next, Jim.

Just discovering this news now and it is heartbreaking for all those Boston fans that found this place to be their home away from home for nearly two decades. Hopefully another Boston oriented bar will erupt with the same notoriety as P Thoms