Kestrel maneuvers to rescue this fledging along Avenue B 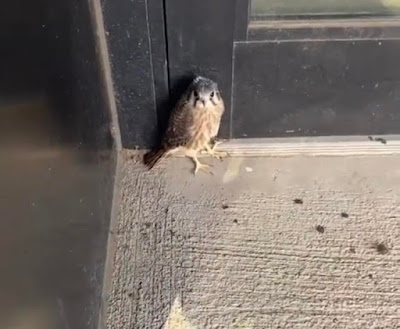 Late last week, some residents discovered a kestrel stranded in a storefront on Avenue B between Sixth Street and Seventh Street. She was unable to get too far off the ground. (Thanks to Ali for the above pic!)
Ranger Rob (aka Rob Mastrianni, a Manhattan Ranger supervisor), who has a long history of East Village bird rescues (here and here, among many others), was called to the scene. 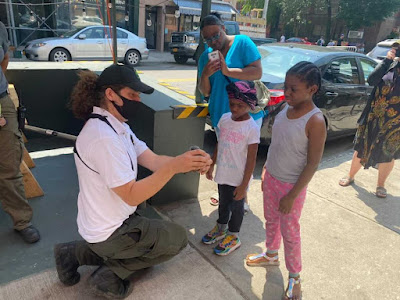 "She fledged a bit early and her tail and wing feathers weren't fully grown out," he told me. (He has an Instagram post on it here.) 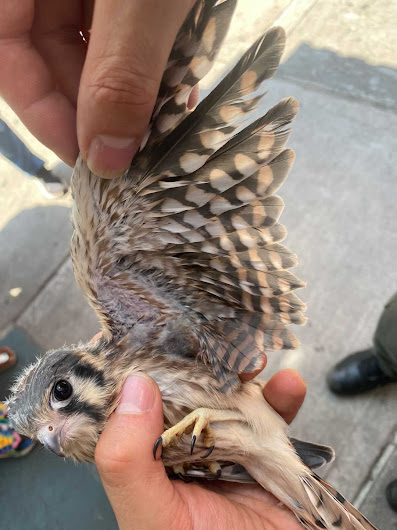 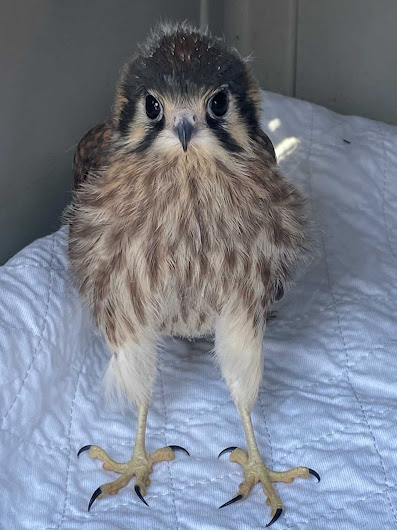 The young kestrel is now in the capable hands of Bobby and Cathy Horvath at the Long Island-based Wildlife in Need of Rescue and Rehabilitation (WINORR). Once the kestrel has developed her flying skills, Ranger Rob will release the bird back safely into the 6th Street and Avenue B Community Garden.
He said that a kestrel family lives along here ... in fact, he released two fledglings here last year.
Posted by Grieve at 11:30 AM

I think people, in general, are inherently good. This bird would otherwise be dead by now without considerste intervention. Thanks to all that helped make this happen.

So glad this little bird was rescued! Thank you, Ranger Rob & WINORR.

Wow, who would have imagined kestrels in Manhattan? What a relief that the bird was helped. And now I know that "fledge" is a verb, makes sense, given "fledgling".

What a cute lil guy, overly eager to fly. Thanks Ranger Rob and caring neighbors!

Nice one Grieve. Will they name him Andy or Paul?

Ranger Rob is a gem & we're so fortunate to have him here to help in these situations. THANK YOU, ROB!

Awwww ! So heartwarming to read this !

Or, Kestrel Maneuvers in the Park

(too bad they didn't rescue her IN THE DARK. we see what you did there, grieve.)

This gives me faith in humanity.

Rob is THE MAN!

I on occasion spot a kestrel around the Bleeker st - 6th Ave area.
Almost took my head off one day while I sat in Churchill Square. All I heard was a "squeak" as he/she barely grazed the ground and was gone with a mouse in tow.