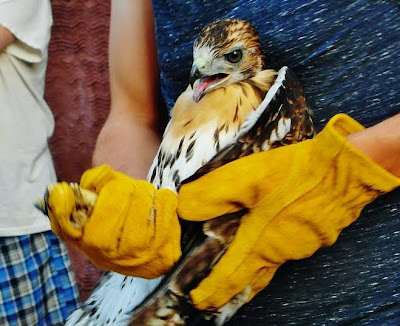 Picking up from last night's post… the first of the young hawks living on an AC unit at the Christodora House on Avenue B and East Ninth Street took flight yesterday morning.

According to Goggla, who has been documenting the parents, Christo and Dora, and their three offspring, the hawk fledged at 10:49 a.m. He glided across East Ninth Street between Avenue B and Avenue C … and that's when he went missing.

A search commenced. Around 6 p.m., a group of residents, including Walt Fitzpatrick, Karen Martinez, Cliff Maloney, Father Pat Maloney, as well as bird watchers Dennis Edge and Francois Portmann, eventually found the fledgling … and someone called Rob Mastrianni, an urban park ranger (he recently rescued a fledgling in Washington Square Park), who arrived to lead the rescue efforts… 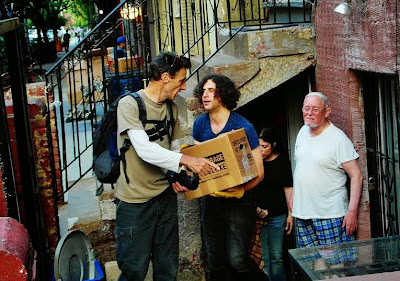 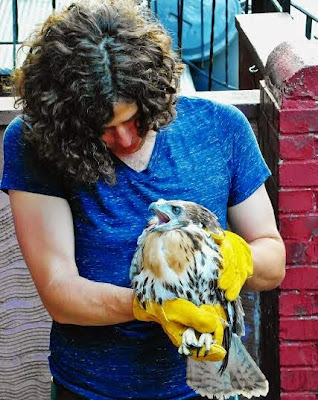 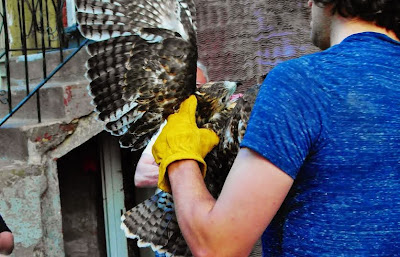 Ranger Rob deemed that the fledgling was uninjured … and placed him in a tree in Tompkins Square Park. 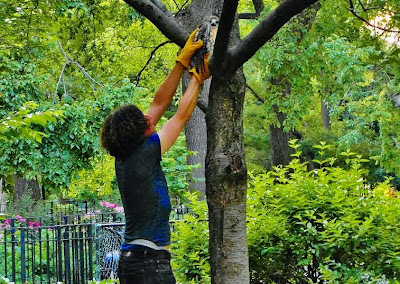 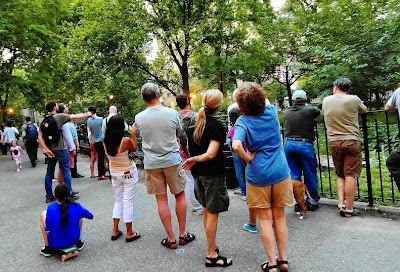 As Goggla noted, we hope that "the remaining two siblings watched and learned something today." Goggla has more about the rescue and a lot more photos here. 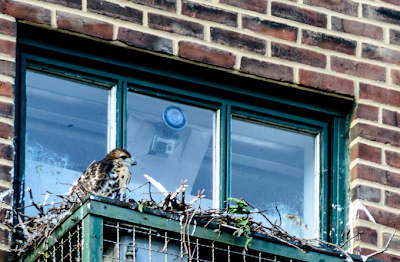 Photos by Bobby Williams
Posted by Grieve at 6:24 AM

Goggla on photo of baby hawk in a tree:
"After being born and raised on an air-conditioner, I have to wonder what the hawk thought of all this."
Lol!

Haha! That was a great line! Go Goggla!

Rob is such a great guy, awesome guitar player too.

5 hawks = 5 dead rats per day, maybe this family can make a dent in the rat infestation.

You are a lovely group of people to do this. I must ask Goggla: on some of your great photos of the parents in flight at your webpage, did you you use one of those super long telephoto sports lenses?

Two conclusions can be drawn from this story:

1. That cute baby hawk is going to grow up to be a psycho killer (fu-fu-fu-fu) just like his/her parents.

2. Most people should reconsider the decision to wear shorts.

I heard a lot of very loud squawking around that time yesterday (I'm on 9 between B&C). I was wondering what was up with the gang, but I looked out and couldn't see anything. If I knew I would have helped look around my buildings. Great effort by those who helped out. Glad the little guy is okay.

a just fledged hawk in an air shaft? definitely a rescue mission!

great work guys, and thanks!

It's cool that Jack White cares so much about birds.

I want to vote (if we're voting) for Goggla's naming of the bird, "Shaft".
Total winner.