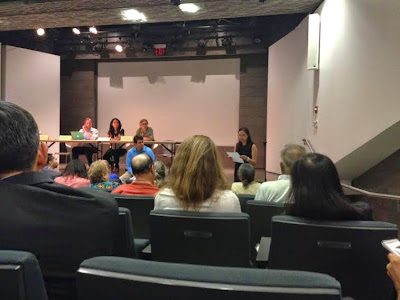 Gigi Li will serve as chair of Community Board 3 for a third term after defeating challenger Chad Marlow in a vote this evening.

CB3 members voted during the monthly meeting 31-15 in favor of Li, who has served two one-year terms as chair. Marlow is a current CB3 member.

In an unprecedented move, The Villager published an endorsement of Marlow last week, an unusual editorial decision given that only CB3 members vote for the chair.

According to the paper:

CB3 is clearly in disarray, and there is a growing sense of disconnect with the community that it is supposed to serve.

There is a strong sentiment for change, both within the community and on CB3.

BoweryBoogie attended the meeting and filed a report here.

Per BoweryBoogie on the outcome:

So, now it’s another year of potential botched decisions and hyperlocal scandals. And through it all, the community suffers.

The Lo-Down has meeting coverage here, including remarks from Li and Marlow.

This past year has been really challenging for us and, moving forward, I am committed to structural and leadership changes that I believe are the core issues. Time and time again over the past few years I have seen how this board and this community are better, stronger and more resilient when we fight the fight together and not apart.

Previously on EV Grieve:
The Villager calls for change atop Community Board 3 (31 comments)
Posted by Grieve at 10:14 PM

Email ThisBlogThis!Share to TwitterShare to FacebookShare to Pinterest
Labels: Community Board 3

CB3 is a disgrace and this election was a joke - and certainly not an honest assessment of who would be better for the community. Hopefully Marlow's run against her wil force her to make some changes although I'm not getting my hopes up.

As the saying goes on every message board known to man, "It's Obama's fault." (Or de Blasio, depending on the topic.)

Don't these Community Board members know that the best way to fix a racial diversity problem is to elect a white guy?

Well good, now that this silly little election is over we can get back to complaining about things that actually matter, such as the severe shortage of photos of Manhattanhenge being posted online, and why there aren't more exotic flavors available at 16 handles?

And when will S'Mac re-open, if ever?