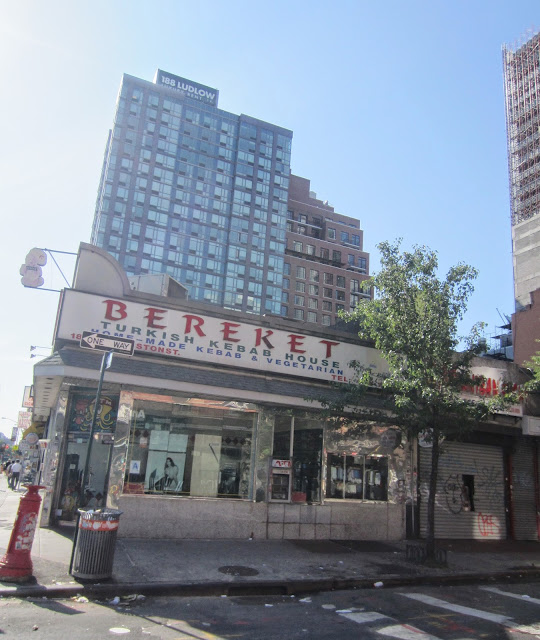 Several EVG readers passed along the news that Bereket closed for good early this morning after 19 years on East Houston and Orchard.

EVG reader Bill Imprint stopped by around 1 a.m., and the quick-serve Turkish restaurant had already run out of falafels and doner kebab sandwiches with several hours to go.

As BoweryBoogie reported back in March, developer Ben Shaoul is apparently buying up the properties occupied by 196-198 Orchard and 187 East Houston for God knows what.

BB pointed out that Katz's is not part of the Shaoul land grab. 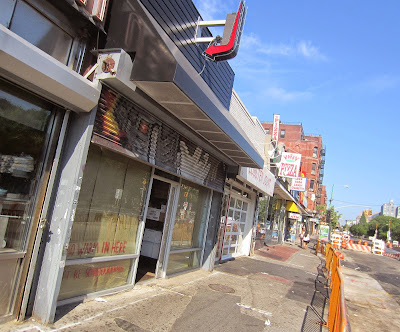 Jeremiah noted that Bereket hopes to reopen nearby on Allen Street.
Posted by Grieve at 9:47 AM

What do you call a thousand real estate developers sitting on the bottom of the ocean wearing cement shoes?

Doesn't Katz's own their land/building? Only way to protect yourself from these parasites. @Giovanni, throw in some hedge funders and lawyers, and you get fat, happy sharks and even happier humans.

This is out of control!!!

Someday, when the story is written of how New York City became douchified, this Ben Shaoul guy will be one of the main antagonists.

Is he opening another branch of the fabulous Hotel Shaoul, like the one on Ave A between E.6th and E.7th? I sure hope so. The open-air ambiance and diverse and party-friendly clientele are big plusses. The complimentary crack rock on the cardboard pillow when I and my 3 bottles of Night Train "checked in" was the perfect touch. Can't wait to see what he has in store for Houston Street. Are his ever-loving parents financing this one too?

More bullshit tall buildings less air, light, character and places New Yorkers want. When will the building glut catch up with these clowns?

Eh, Manhattan has been pretty much dead for a long time now. Kind of amazing that there are still places like this left to close. Gave up caring...

Was just going to say:
Lentil soup from Bereket = happy!