About Overthrow Boxing Club, the gym coming to the former home of the Yippies at 9 Bleecker St. 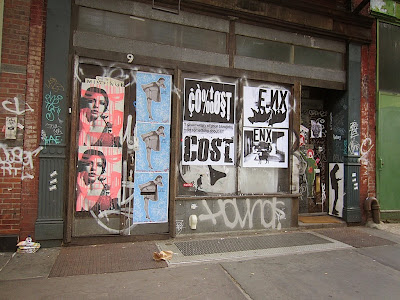 Here's more information about the three-level boxing gym opening at 9 Bleecker, the former home of the Yippies.

The gym will be called Overthrow Boxing Club, named for Overthrow, one of the countercultural newspapers that the Yippies published here.

In a video posted on June 15, Throwback partner Joey Goodwin, aka "the Soho Kid," a Golden Gloves contender and creative director at men's clothing label Unruly Heir, provides a quick overview of the space.

"We're going to turn this into a great spot, and a great business and make some good things happen," he says. "It's going to be boxing meets punk rock ... we're going to keep the history, keep the heritage, and go from there."

And now the video...

As the Times reported in June 2013, Steven L. Einig, a lawyer for Centech, which holds the building's mortgage, "stated that Yippie Holdings, which bought Number 9 along with a nonprofit called the National AIDS Brigade, had failed for more than five years to make payments on the $1.4 million mortgage."

For their part, a lawyer for Yippie Holdings, said that the group was "compelled into foreclosure with payments being rejected" by Centech as part of a scheme or plan to take over the building.

The Yippies had to vacate their home of 41 years this past Jan. 17 while litigation continued. The space here near the Bowery had been on the market for $22,500 in monthly rent.

Previously on EV Grieve:
The Yippie Museum Cafe is in financial trouble

The Yippie Museum Cafe will reopen next Wednesday

Fights of a different kind coming to 9 Bleecker St., longtime home of the Yippies
Posted by Grieve at 5:09 AM

Yea, that guy looks very "punk". I wish these Wall St. type investors/entrepreneurs would stop using that word when describing new businesses in the EV. It's just silly now. whatever punk was, it's not what downtown NY is now.

Great, just what East Village needs, a bunch of testosterone and juiceheads taking out their anger on each other and bags. Welcome to the brodome.

Heaven forbid someone opens a live music venue on the first floor, a cafe on the second, and a record store/radio station on the third.

Thank you for posting the video. It's hilarious!

Wait, it is a parody, right? Right?

Otherwise there is no way that anyone serious would, for starters, use Dick Dale's music, which Tarantino killed 19 years ago.

Please tell me that this whole thing is a goof.

Is this going to be a serious boxing gym, or a boxing gym for sorority girls and frat boys who want to jump on the boxing as exercise trend?

But is it "house made" and "artisanal"?

Makes sense, coming from two "bros" who describe their clothing line as follows: "Unruly Heir was founded in 2008 by Florida native Joey Goodwin & Brookylnite John Gagliano. Setting its own rules and casting aside mindsets, Unruly Heir places an irreverent twist on classic menswear attire, providing one of a kind pieces for the tailored young man who inherit life’s experiences and always go against the grain."

In the video, they keep spouting off about "counterculture". Anyone who knows anything about counterculture knows that it doesn't exist anymore. (Except in the world of advertising/marketing.)

So keep on "breaking the rules" Unruly Heir!!

Reminds me of someone describing a guy this way: "He's a Wall Streeter, but he's really a hipster at heart." She didn't realize her own joke. As if "hipster" is the authentic layer below.

Damn, I thought it was called "Unruly Hair". Which is exactly what I have. Was gonna get a haircut there.

If these guys were going to be in a street fight, they'd be hiding behind their lawyers and their pockets.

And next up, a and a sidewalk permit and liquor license application, they need a cocktail Punch to pair with that punch.

How exactly does Punk and boxing honor the heritage of hippies, yippies and the Peace Generation?

On the other hand, if he's genuine about maintaining some kind of respect for the history of the place, and is affordable to locals and not another David Barton clone, it's way better than what everyon expected..

I was at that party and I even see my head bopping around in that video.

I've lived in this neighborhood since the early 90s and watched its dismal transformations and - in response to some of the negative comments above - I was really impressed with a lot of what I saw here.

I've been interacting with a few of the boxers and there is something very sweet and earnest about what they are up to. I wouldn't dismiss this as a bunch of fratbros - what is happening transcends class and seems to have more in common with an outreach program - albeit one involving a lot of drinking - than with the nonsense people wrote above.

I've talked with Joey a couple times about the yippies and he has expressed a genuine interest and respect for that history, and a real eagerness to honor it. I have nothing but good things to say about this cast of characters.

Jon Stuen Parker of the AIDS Brigade challenges Joey Baldwin to an charity exhibition boxing match, all proceeds to fund an ibogaine clinic in Kabul, Afghanistan. But Baldwin is YELLOW.

Immortal Technique with Beal and Parker at the NYC ibogaine benefit:
https://www.youtube.com/watch?v=1wCk2cYN2nQ

Check out the BBC documentary before they take it down... https://www.youtube.com/watch?v=vLKNE1GSHEo&feature=youtu.be

Great, now on top of everything else these rich brats will be professionally trained to assault me if I dare to ask them to shut the fuck up at 3AM on a tuesday. Like its not enough of an advantage that they are 25 and I am 56.

Parker is 60, but he's going to clean Joey's clock!

Age and treachery will always triumph over youth and skill... :)

So C-Squat has a "squatters" Rights MUSEUM next door and now Yippie is a fucking Boxing Gym..... I respect that they are (Maybe) trying to be positive for the community, but I just don't see it. I hope LES fights back against the gym honestly. Unless they do a lot for the community fuck them and fuck all the yuppies who continue to move in and gentrify the area.

Will the zippies / yippies open up a coffee shop once again..

To 4:13, do we really need another coffee shop here there are so many places to get a cup of joe...

I got excited when I saw the title of this post.

We are an older couple (41 and 47) who have been watching old Tyson boxing matches every night for the last week.

We want to learn how to box in order to get fit so we began researching nearby boxing gyms to join.

So imagine my horror when I saw this f*ckfest of a video. I never thought in a million years these trust fundies / Wall Streeter / investment douches could f up our beloved boxing. How do you pussify and dilute BOXING for Chrissakes!? Just wow.

We'll go to a REAL boxing gym thanks.

This Guardian article "The end of the Hipster" (http://www.theguardian.com/fashion/2014/jun/22/end-of-the-hipster-flat-caps-and-beards)

rightfully predicted that the 'Josh fad' will pass and that the hipster will begin to acquire the artifice of machismo.

What will replace the skinny-jean, feminized look? Quote, "A more macho look, almost to the point of caricature, in a bid for men to reinforce their identity."

Did you guys ever see that Shia LaBeouf getting beat up outside a Vancouver bar? That's what's gonna happen to these guys if they ever get into a real fight. Bunch of Shias, just a bunch of pretenders hiding behind mommmy and daddy's skirts. Fuckin' hipsters.

"A more macho look, almost to the point of caricature, in a bid for men to reinforce their identity."

that's what the whole beard thing is about

@Alec
Museums are major gentrifiers. Developers and restaurants love them. Give them a donation and they shut up. They should be doing current activism. This runs counter to preservation and any of the current activism going on in the neighborhood.

the Yippie Museum and Cafe was involved with all kinds of activism, so it was good. Other groups take money from the restaurants and politicians. Many non profits doing good things will unfortunately take money from anyone including developers. It's a big problem.

Boxing is disgusting and violent! These guys are sleazy too, I wouldn't buy a used car from them, would you?

Doesn't appear to be a lot of support for this. Wonder why?

I was there for the vote when the newspaper's name was changed from the "Yipster Times" to "Overthrow".

Now some scumbag yuppies have taken not only the space, but also the name.

This is worse than when that Real Estate company took over the Palladium.

Our instructors are not only skilled MMA Practitioners, they are also educated to deal with and recognize the skills and capabilities of everyone who joins our school.So if you guys interested in best Boxing in Connecticut you are welcome to our online registration.