Films on the Green return to Tompkins Square Park tonight 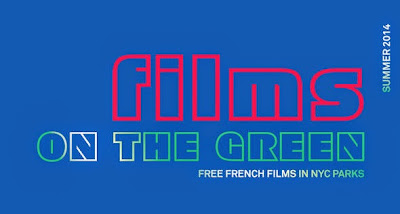 The Films on the Green are back in Tompkins Square Park tonight and next Friday (June 27 for those keeping track) ...

To refresh your memory: "Films on the Green is a free out-door French film festival that brings classic and contemporary French cinema to New Yorkers in different parks around the city." (Merci to the French Embassy!)

Friday, June 27, 8:30 pm
"La Haine"
Per IMDB: After local youth Abdel is beaten unconscious by police, a riot ensues on his estate during which a policeman loses his gun. The gun is found by Vinz who threatens he will kill a cop if Abdel dies. (Drama, duh!)
By Mathieu Kassovitz
Starring Vincent Cassel, Hubert Koundé, Saïd Taghmaoui

As for the free Films in Tompkins series that played on Thursday nights in previous summers ... well, as you may have figured by now, that is not going to happen this year. A rep for Howl! Arts confirmed this to us via email. We hope to have more on this later.
Posted by Grieve at 5:10 AM

Howl's films were lame, anyway. It's good an organization with better taste is in charge now.

It rains every Thursday in the summer, anyway.