Last in the fledge class 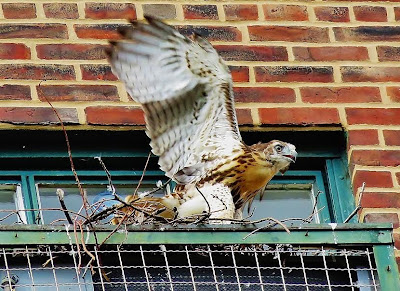 Just one of the (baby?!?!) hawks remains in the nest on the Christodora House ... his/her fledgling siblings have already taken off.

After a little drama Monday night, Shaft has seemingly found his, uh, wings. The second fledgling left Tuesday. He/she has been mostly hanging around East Ninth Street between Avenue B and Avenue C. Goggla has an update on the fledglings here.

Hawk watchers figure hawk No. 3 will leave the nest tomorrow.

Fledge #3 is a sign of the times: With no job prospects, she lives with her parents.