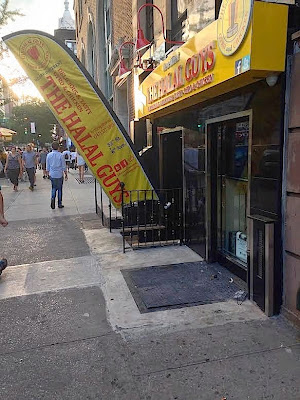 We walked by the incoming Halal Guys space last evening on East 14th Street just east of Second Avenue ... and spotted about 10 workers inside stocking the refrigerated units with drinks, etc. When asked, one of the workers said they'd be open "soon."

Soon turns out to be tomorrow, as the Daily News reports that the first restaurant from the popular food-cart vendors opens at 7 a.m. 5 p.m.

And what can you expect?

In addition to the standard gyros and platters sold at the carts, the restaurant will boast new offerings, including a juice and smoothie bar, hummus, tabbouleh, baba ghanoush, Mediterranean salads and yogurt. And the falafels will be made fresh, instead of merely reheated at the carts.

While a rice-and-meat platter is $6 at Halal Guys’ carts, the East Village restaurant will offer two sizes: a regular for $6 and a large for $7.

Meanwhile, the owners are planning to go national (and eventually global) by working with Fransmart — the franchise company behind the rapidly expanding Five Guys Burgers brand — to open restaurants in Los Angeles, San Francisco, Chicago, Washington, D.C., and Houston.

So does this mean that we can't like them anymore?

We were first to report on the East Village expansion last Sept. 28.

The Halal Guys are apparently opening their first restaurant in the East Village
Posted by Grieve at 12:29 PM

Email ThisBlogThis!Share to TwitterShare to FacebookShare to Pinterest
Labels: The Halal Guys

I believe I read that the 14th street location will not technically be considered part of the larger future conglomerate...so yes, people are allowed to still like them (though they can still complain about it at the same time!)

It will be HUGE!

Until they open on virtually every block a la Starbucks, I say support them. mmmm... falafel.

They're really pretty crappy. "Expand to Chicago" to "LA." Ha Ha Halal. Heaps of cold meats, big fake spit "GYRO" (They don't even know how to pronounce it) Just because 14th St & 2nd Ave has major foot traffic and is close to a high school, folks who have never had the experence of street food in Greece, Turkey or the neighboring states, or even Detroit or Chicago might think that, that dog food served up is a good deal.

And w/ rushed and sloppy service, if it can be called that.

I support a burgoning buisness enterprise and hope the owners of that biz do a bit more reserch into their product and how it is served. Spelling sucks

A pet peeve of mine, which I have observed on food trucks, in Delis and other assorted culinary ventures: It's absolutely meaningless to wear these "prostate exam" gloves if you don't take them off between different tasks.

You see? Small businesses become big businesses (or get devoured). That's just how it works.

What a nice, big, yellow sign you have there. Hey Mr. Halal Guy, is that a banana in your pocket or are you just happy to see me?

How did they get the permit for the crazy "knife / sword" looking vertical siganage?

Stopped by this morning to say hello. Nice guys. They gave my wife some free samples. The truck is also there for now until the store is truly up and running.

Lets see how much they like being regulated by the NYC health dept now. A lot different when you have a food cart and you don't have to worry about inspections