[Updated] Goat Town is closing to make way for a pizzeria 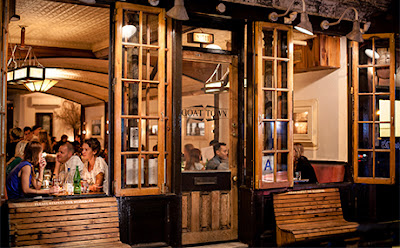 The new concept: "some kind of pizza place," per the tipster, who notes that the staff was given less than two weeks notice of the impending closure. (We understand that ownership will remain the same, with a shift in management.)

The restaurant between Avenue A and Avenue B arrived in the farm-to-table heyday, with Goat Town staffers setting out to grow herbs and vegetables in the backyard garden ... and as Eater noted in December 2010, "all pickling, preserving, and jarring" was to be done in house.

The address has been home to several restaurants since Le Tableau closed in December 2007. Before Goat Town, the space was home to Seymour Burton and Butcher Bay.

The new restaurant, called GG's, will serve pizza and other dishes that, just like the current New American menu, include ingredients sourced from the restaurant's back garden. A representative tells Eater that Morgenstern hopes the new place will "serve the East Village community in a broader way." GG's is slated to open in September.

"According to a tipster,..."
I read that as hipster, just a telling of that place and the EV invaders.

Four years, that's pretty much the lifespan of these artisanal and luxe joints opening in the EV; also how long the newbie transplants stay in the neighborhood after they're tired of their consumption and funds run dry, which they then move back to mommy and daddy in suburbia.

I remember when it use to be a bodega selling mostly cocaine.

Farm to table, but not sustainable.

I hope they're not going to have seating in the backyard instead of the herb garden. Those backyards are unacceptably loud as is (WOOOO HOOOOOOOOO!). I f****** hate some of these new "community members."

You mean the farm-to-table heyday is over??? Shit.

No more goats? I guess that means you can't even make money in the EV selling stuff in hoof anymore. Speaking of goats...

What do you call an unemployed goat?
Billy Idol

What do you call a goat at sea?
Billy Ocean.

What do you call a goat with one ear?
Van Goat.

What do you call a goat on a mountain?
A Hillbilly.

What do you call a goat that lip syncs?
Billy-Vanilli.

What do you call a redneck who owns 6 goats?
A pimp.

I've lived there since before Le Tableau opened. I don't miss that or Butcher Bay, nor will I miss Goat Town (though the way they used subway tiles for the booth seating was kind of cool). But I still lament the loss of Seymour Burton. That place had a fantastic burger, among other delicious offerings.

To BC above,
Let us not forget the so-called T-shirt store that followed selling heroin rather than cocaine.

Farm to table has gone table to farm. Damn hipsters are going back to their rural farm town.

This was an awesome place. I will miss it greatly!

How many more pizza/"casual Italian" places do we need.

Oh no. No more Goat Town? What will the hipsters and posers and wannabes do now? Shit. There goes the neighborhood.

Whatever happened to the crazy guy who lived upstairs from this place? We used to call him Norman, but I don't think that was his real name. He used to collect cans and bottles around the neighborhood and then rummage around in the restaurant's garbage cans outside at 1 a.m., waking all the neighbors. Sometimes he sat in a chair he dragged out to the corner of 5th and A and panhandled. He could engage people in a friendly and vociferous way in the backyards, but then he wouldn't leave you alone. And at other times he'd start screaming and swearing at the top of his lungs out his window, his voice carrying far and wide among all the tenement buildings of E. 5th and E. 6th streets...I don't miss the noise, but I have worried about him since he disappeared.

You probably mean Donald. He lived at No. 511. He grew up int he neighborhood.

EVG, thanks so much for this link and all the background on Donald. I probably shouldn't have used the word "crazy" above--I meant it (somewhat) affectionately, although truth be told it could be difficult to be his (across the courtyard) neighbor just because of the constant noise. Anyway, as someone in the mental-health field myself, I had long pondered what his psychiatric situation might be. I'd heard that his mother was a very bad alcoholic and wondered if he might have some kind of alcohol-related developmental disability. Glad to hear he is okay--although this was quite awhile ago now. Hope that he still is.

I knew what you meant!

I swear one time I was walking someplace random for me ... maybe Columbus Circle... and I see Donald go by with the cart stacked high with his usual finds!

Oh no... this place was great for brunch since the "woo" crowd wouldn't woo there. It was just normal, peaceful breakfast eaten, and the food was great.

I see a lot of people talking smack about Goat Town but if I remember right the residents of 5th were very happy that it was trying to be a decent neighborhood restaurant and not a nightlife destination.
Seymore Burton was good but was shut down by the health department if I remember and never re-opened.
I don't see a pizza restaurant working that well in that location but I could be wrong. Could be the greatest pizza ever. I think the residents of 5th will be happy as long as they follow their stips and keep it down at night and if their neighbors are happy it's none of my business.

Anon 11:16, yes, I think the residents are used to a restaurant in this location and will be okay with it as long as they don't try to create an outdoor back garden for customers. As the person who wrote about Donald, above, I was always most afraid of that. I even wondered whether his presence was a deterrent to a garden, i.e., he had access to that courtyard and would likely have been trying to chat up restaurant patrons all the time. Now that he's gone, though, who knows...

Really disappointed by this, Goat Town was one of the best restaurants in the neighborhood. And contrary to the claims of many of the posts here had a slightly older and quieter clientele than most places nearby. Only reason for the change I suspect is that pizza is extremely cheap to make and provides enormous profit margins.