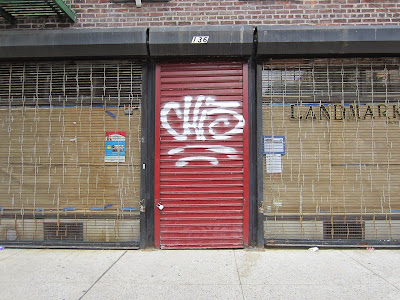 [Photo of new storefront from Sunday]

St. Mark's Bookshop was originally set to close on Monday ahead of their move to 136 E. Third St.

However, workers were still finishing up the new storefront just west of Avenue A. So yesterday store officials released new dates for everything to happen...

Confirmed: We are moving to 136 East 3rd Street on July 1 and will remain open at 31 Third Ave through Sunday, June 29.

The bookshop has been at 31 Third Ave. and Stuyvesant Street since 1992, and in the neighborhood a total of 37 years.

Renovations at the future St. Mark's Bookshop on East 3rd Street
Posted by Grieve at 5:16 AM

I hope the owners of the bookstore paint over that tag on the gate, that is my least favorite "graffiti" in the neighborhood and they are everywhere and ugly.