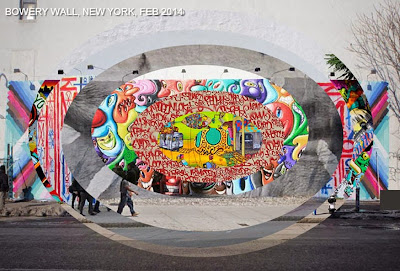 Over at the NYPL Labs blog, Brian Roos had some fun playing around with the Google Street View archive.

Roos, a New York Public Library developer, used the Houston/Bowery Mural Wall to experiment with ... gathering all of the murals that Google captured to 2007, then filling in any of the missing artwork. He created a brush tool that allowed him to "erase" each layer to reveal the one previous to it ... and in the above image, he cut holes on each layer of the murals for a rather disorienting effect.

For a better explanation of all this, head over to the NYPL Labs for more... and see what other ideas Roos has for the layering tool.

Thanks to @seancarlson for the tip.
Posted by Grieve at 5:00 AM