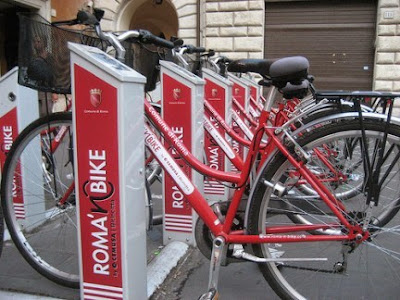 Because this is a popular topic around here...

While municipal bike-sharing has thrived from Paris to São Paulo, Rome’s Roma’n’bike has been hobbled by crooks, politics, and geography — the city sits on its famous seven hills — combined with residents’ reluctance to abandon cars and scooters. “Romans don’t like to show up anywhere sweaty from a bike ride,” says Federico Niglia, a history professor at Luiss University who owns a bike but rarely pedals. “You have theft, bureaucracy, political wrangling. The same problems that plague the country are dooming bike-sharing.” — Bloomberg BusinessWeek

(Read "Rome's Bike-Sharing Program Is a Bust" here)
Posted by Grieve at 12:36 PM

I go to Rome twice a year and I've never even noticed these bikes. They're definitely not being used.

So it'll be a bust, so what. It's probably more to do with the complication of operating the damn thing (the one time I tried a daily-use Citibike I had to visit three different kiosks before one worked) than a lack of patronage. People will just get their own bikes (it's already happening based on the difficulty these days of finding open bike parking) and continue terrorizing the bike-phobes.

Ex. Actly. “Romans don’t like to show up anywhere sweaty from a bike ride"

It would be interesting to know the percentage of the Roman population that uses bicycles to begin with. Even then, there are no conclusions to be drawn from this regarding Citibikes.