Female rebellion, the humanity of the homeless and struggles of immigrant workers are among the themes of the initial offerings of the Museum of Reclaimed Urban Space's (MoRUS) Women of the Lower East Side Film Fest kicking-off Aug. 1, with a screening every evening at various indoor and outdoor venues through Aug. 9.

Opening night (Aug. 1) will feature "What About Me," which Billboard described "as much a bohemian time capsule as it is film art." Using Tompkins Square Park and its environs as a backdrop, with a procession of downtown legends including Dee Dee Ramone, Rockets Red Glare and Johnny Thunders in cameos, director/actor Rachel Amodeo traces the steps of a woman’s decline after she loses her apartment. 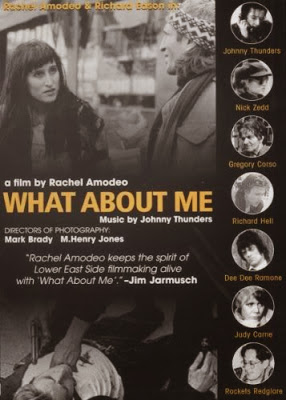 "What About Me" will screen at Anthology Film Archives at 8 PM.

"Your Day Is My Knight," a documentary sharing stories of immigrant residents of a “shift-bed” apartment in New York’s Chinatown, will screen on Aug. 2 at Orchard Alley Community Garden, 350-54 E. 4th St. The film’s director, Lynne Sachs, as well as other participants in the film, will be in attendance to introduce the screening with an informal Q&A afterwards.

Suzanne Wasserman's "Sweatshop Cinderella: A Portrait of Anzia Yezierska" will screen on Aug. 3, also at Orchard Alley Community Garden. This short film mixes archival stills and footage, silent film excerpts, letters, newspaper clippings, and interviews to provide a sense of the Jewish Lower East Side in the 1920s through the 1950s and the life of the critically acclaimed Jewish-American novelist. Director Suzanne Wasserman will be in attendance for a Q&A following the film.

A limited supply of all-inclusive passes for $20 are now on sale at Eventbrite or by visiting MoRUS, 155 Avenue C between 9th and 10th Streets during hours of operation. Admission to each individual screening will otherwise require a suggested donation of $5.

Further details regarding the MoRUS Women of the Lower East Side Film Fest, including film lineups, venues and collateral events will be updated as available here.

MoRUS is calling for amateur filmmakers to compete for a spot in the festival. Submissions must tie into the “Women of the Lower East Side” theme and can be anywhere from 30 seconds to 10 minutes duration.

The competition is open to filmmakers of any gender, any age and at any experience level who submit either a link to their film or a DVD copy of the film along with a brief artist’s statement and $10 entry fee to morusfilmfest@morusnyc.org or mail to MoRUS Film Fest, Museum of Reclaimed Urban Space, 155 Avenue C, New York, NY 10009.

Deadline for submissions is Friday, July 18 at 5 PM ET. A jury comprised of local business owners, artists, activists and MoRUS volunteers will determine which films will be publicly screened on Friday, Aug. 8 at a venue to be determined. First, Second, and Third-Place Winners will be selected by the audience and awarded monetary/in-kind prizes. In addition, one film will receive the MoRUS Choice Award.