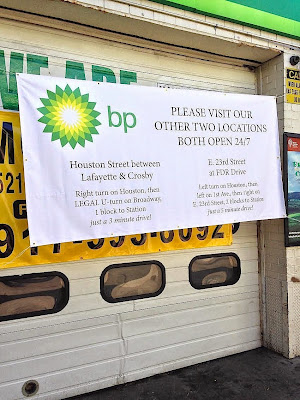 As we previously reported, the BP station on Second Avenue at East First Street is closing … tomorrow is the last day. 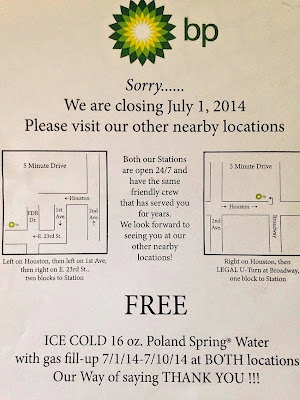 As for what's next for the BP property here, a tipster tells us that a boutique hotel will eventually rise here. For now, though, this is still in the rumor stages — there aren't any building plans on file with the city at this time.

Meanwhile, the BP station on East Houston and Lafayette will eventually be replaced by luxury something.

Updated:
The station will now close after the business day on July 6.

BP station on 2nd Avenue closes this month
Posted by Grieve at 5:14 AM

If a boutique hotel takes this spot then the same amount of taxis will be coming to this location in the new future. I could stand a luxury condo building but an f-ing hotel would break into new territory and be the expansion of the f-ing Bowery hipster tourist play land. Due to mid-level developers being priced out of, I can't believe I'm saying this, the luxurious Bowery out hood is looking like a bargain.

Eventually, of course, everything in this neighborhood will be luxurious! What a wonderful world!

where the hell is anyone gonna get gas on the LES?!? I don't even own a car, but this is rediculous!

Why you do this to me Dimi?

Very true! I need to find the original of that photo and post ...