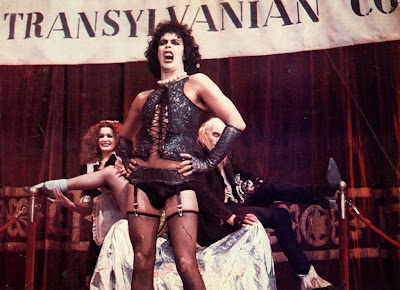 We originally heard that the Films in Tompkins series was not going to happen this summer in the Park.

However, we've just learned that there will be a slightly abbreviated series starting on July 10, and playing on consecutive Thursday nights until August. (A few August dates are expected as well.)

Only one film has been revealed so far: "The Rocky Horror Picture Show," which will include a Rocky Horror performance/costume contest. More info on the films as it becomes available.

Meanwhile, the Films on the Green series continues in Tompkins Square Park tomorrow night with a screening of "La Haine."
Posted by Grieve at 5:30 AM

Oh, hey, so did FiTSP read my suggestion [ahem, ahem] about the props and costumes, when they played this in two years ago. They also tried to play this last year, but was cancelled because, of course, the rain in EV stays mainly in TSP on Thursdays. Maybe they should do a midnight showing of this every summer then. Will Two Boots be handing out free pizzas still? Or will it be BYOP. Get your popcorn and munchies from Ray's, nonetheless.

Tomorrow's La Haine by Films on the Green est à voir; ca va chier des bulles. The world is yours.

The in the know are saying Gringo might be played

This is brought to you with love from the hospitality restaurant and real estate industry.

Thursdays will be hotter and rainier than normal, with the hottest periods in early June, early to mid-July, and early to mid-August.

“Bread and circuses” (or bread and games) (from Latin: panem et circenses) is metonymic for a superficial means of appeasement. In the case of politics, the phrase is used to describe the creation of public approval, not through exemplary or excellent public service or public policy, but through diversion; distraction; or the mere satisfaction of the immediate, shallow requirements of a populace, as an offered “palliative.”

"Bread and Circus", what Gringo Bloomberg gave to NYC, his bro brothers, real estate developers, kids -- the yunnies and trustafarians --, and his lord -- the godsend billionaires.

Oh great, so they *are* going to bore us with their hackneyed repertoire.