1st round of necessary permits OK'd for the incoming Wegmans 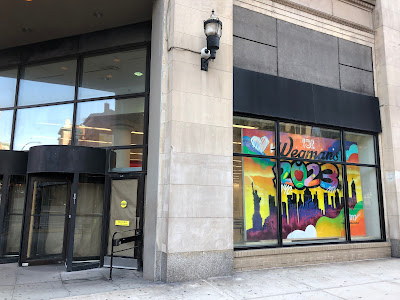 The Landmark's Preservation Commission (LPC) has approved what is likely the first of many permits needed for the build-out of the Wegmans site on Astor Place.
This is a bit of a formality, as no one that we're aware of was speaking out against renovations for the Kmart-replacing grocery at the landmarked 770 Broadway between Eighth Street and Ninth Street. You can read the approved LPC permit here.
Wegmans signed a 30-year lease last month for what will be the grocer's first Manhattan outpost. It is scheduled to open in the second half of 2023.
Kmart closed in this space after 25 years on July 11. Wegmans had agreed to buy out Kmart's lease to make this deal possible.
H/T Upper West Sider!
Posted by Grieve at 5:01 AM

Will they reopen the subway egress? They really should reopen the tunnel between sides.