Where are they now? Catching up with Gem Spa's former Zoltar in Bushwick 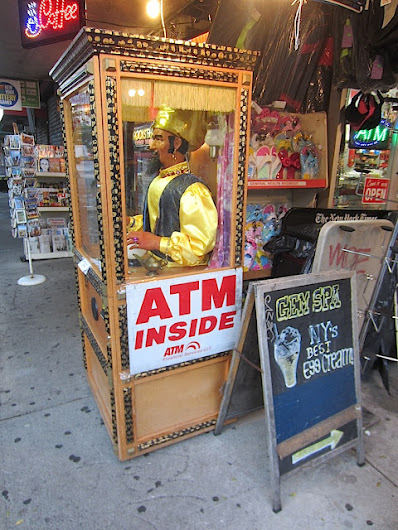 Archival photo from the vast EVG Zoltar collection
In May 2019, local card-carrying members (hi!) of the Zoltar Fan Club were heartbroken to learn that their favorite Animatronic Fortune Telling Machine had been removed from outside Gem Spa on Second Avenue at St. Mark's Place.
As we learned in June 2019, Zoltar's owner found a new home for his words of wisdom outside OMG Pizza in Bushwick.
And that's the last we heard about the situation... until now.
At the Times, Alex Vadukul has an update on Zoltar ... as well as a conversation with local businessman and arcade owner Carlo Muraco, who seems to have a lock on the NYC Zoltar market.
First, Vadukul speaks with some passersby outside the pizzeria in Bushwick about this Zoltar's past.

"I definitely put a few bucks into that thing when I was drunk," said Patrick Reid, 30. "After skating in Tompkins we'd meet up on St. Marks and pull up to it, maybe hang out a bit in front of it before heading off to the next adventure. He told me once I could walk a path to greatness, but I think he's bad juju."
"It's bizarre this remnant of Gem Spa has ended up here in nowhere Bushwick," said Amrit Dhillon, 26. "It's interesting to see how New York eats itself up and spits itself out again, like a living organism."
Saddam Alsaidi, 27, who works at the pizzeria, knew of Zoltar's past life across the river. "I know he used to be famous in the East Village," he said. "He was a big deal."

The article also gets into the disagreement that led to Zoltar's Gem Spa ouster... as well as comments from Parul Patel, who had been running the corner shop for her father until the official closing in May 2020.

"I'd only heard he’s out there in Bushwick," Ms. Patel said. "It's nice to know there's a piece of us still out there in the city. Even though he's not in the East Village anymore, he is a real living artifact of Gem Spa."

You can read the article, which includes several links to EVG's deep reservoir of Zoltar posts, right here.
Zoltar first arrived at Gem Spa on Sept. 23, 2012.
Meanwhile, there is a new Zoltar outside the March Hare on Ninth Street.
Posted by Grieve at 5:07 AM

The Gem Spa Zoltar was much cooler than the March Hare version.

There's a Zoltar at Coney Island, but his name is not displayed, so only those in the know will receive a wink and a "I see you there!"