On the CB3-SLA docket tonight: Ixta for the former DBGB space on the Bowery 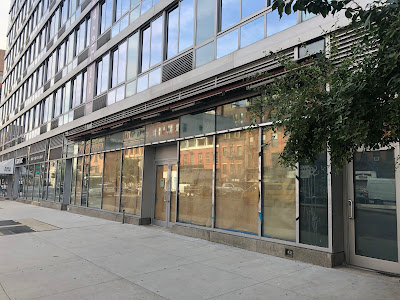 Tonight is the second of the two CB3 SLA committee meetings for August.
Here's a look at a few of the applications on the agenda:
• Ixta (LLC to be formed by Mike Himani), 299 Bowery (op)
This looks to be tonight's big-ticket item. Restaurateur Akbarali Himani is seeking a full liquor license for Ixta, a Mexican restaurant proposed for the former DBGB space at 299 Bowery between First Street and East Houston (top pic). 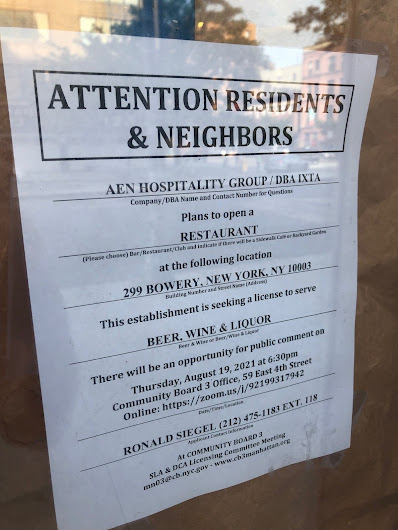 According the the public documents on the CB3 website, Ixta would be open Sunday to Wednesday from 11 a.m. to 11 p.m., with hours of 11:30 a.m. to 2 a.m. Thursday through Saturday. The space in the Avalon Bowery complex is quite large, with a capacity of 194 patrons, who would be treated to "live Mariachi performers."
Himani has been running a variety of restaurants in NYC and Long Island the past 30 years. His current credits include a Chickpea in Penn Station and NISI Mediterranean in Times Square.
Daniel Boulud closed DBGB here in August 2017 after an eight-year run.
• The York, 186 Ave B (op)
Hospitality vets James Hurst and Hayden Tobin are looking to open The York here at 186 Avenue B between 11th Street and 12th Street.
The York would be open daily from 2 p.m. to 2 a.m. and serve a menu featuring "American comfort food," per the questionnaire at the CB3 website. The sample menu items include several burgers, sandwiches and brunch entrees.
This address was most recently Very Thai, which had a nearly three-year run until late 2019 ... after taking over from Barbone.
• ACES (Fine Food and Spirits Inc), 197 2nd Ave. (op)
This is a carry-over from the July meeting for the former Black Emperor space between 12th Street and 13th Street. You can read about it here. The Aces questionnaire is at this link.
Tonight's meeting starts at 6:30 in the CB3 office, 59 E. Fourth St. between Second Avenue and the Bowery. There's also a Zoom option via this link.
Posted by Grieve at 5:12 AM

"The space in the Avalon Bowery complex is quite large, with a capacity of 194 patrons, who would be treated to "live Mariachi performers."

I would not want to be living in the immediate upstairs vicinity of this place.

Re: The York. No opinion on the owners but this is a clear case where the 500 foot rule should apply. Very Thai did not have a full liquor license so the owners need to demonstrate that another full liquor license is in the public interest. It just states covid space but shows pictures of the backyard. I hope the people in that building show up to speak about the rear yard. No matter how good the owner, it's just a recipe for disaster.

The application shows 16 licensees within 500 feet, which is not unusual, though not in the spirit of the 500 foot rule. Ixta will be found in the public interest unless there are a couple of other Mariachi bands on the block.
The backyard use is probably approved by the DOB, though it probably is illegal under the Zoning Resolution.
Backyard noise is a bummer because it reverberates off the brick walls.