Aces Fine Food and Spirits in the works for 197 2nd Ave. 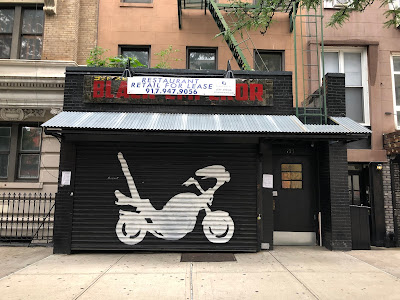 Tonight's CB3-SLA committee meeting includes an applicant vying for 197 Second Ave. between 12th Street and 13th Street.
According to the public documents on the CB3 website, applicant Michael Dollaway is proposing an establishment called Aces Fine Food and Spirits. The configuration for the cocktail lounge-restaurant features 12 tables for 36 guests as well as a 22-seat bar.
Dollaway's bio posted with the questionnaire shows a background in management/ownership at several now-closed upscale spots, including Provocateur in the Meatpacking District and Lily Pond in East Hampton.
No. 197 was most recently Black Emperor, which closed last August. Shoolbred's closed here in June 2017 after nearly 10 years in business. This address was Jade Mountain, home of the great Chow Mein sign, until 2007.
CB3's SLA committee meets tonight at the Public Hotel, 17th Floor, Sophia Room, 215 Chrystie St. between Houston and Stanton. The festivities start at 6:30.
Posted by Grieve at 4:59 AM

Interesting. I'm eager to see something fill the space--I really liked Black Emperor and was very sad to see it go. My hope is that if Aces gets the spot that they are more Black Emperor chill-quirky vibe and less Jackdaw loud-and-basic-bro-brunch vibe.

I used to eat there with my family back when it was the Jade Mountain Chinese restaurant. Wow that takes me back to the old style Chinese food restaurant that served Chow Mein where you would order one dish from Colum A and one dish from Colum B and the food would arrive in the old style round silver colored bowl dishes with the round cover with the pull off handle on top. We will probably never see that type of Chinese restaurant again.

What an original name.

I liked the faux fireplace at Shoolbred's. I think I still have a wooden happy hour token from there.

I still miss the world's greasiest and most delicious shrimp toast from Jade Mountain, a restaurant truly from another time and another New York.