East Berlin set for 169 Avenue A 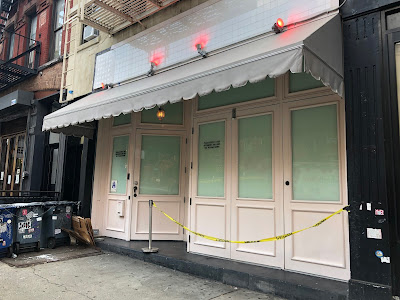 169 Avenue A, long a home for a variety of live music here between 10th Street and 11th Street, is reopening tonight as East Berlin.
As Brooklyn Vegan first reported, East Berlin is a sibling of Berlin downstairs at 2A, 25 Avenue A at Second Street. Like Berlin, East Berlin space will feature various DJs and live bands. (Don't see any social media platforms or website for the venue just yet — find some upcoming tickets here and here.)
No. 169 was most recently Lola after a stint as Coney Island Baby... the address was previously EVG favorites HiFi (2002-2017) and the indie live music venue Brownies (1989-2002).
Posted by Grieve at 4:50 AM

I can only assume the facade will not be open with live music playing, right?

Good times were had at Brownies! Barely been inside since they closed.

I wish they’d just bring back Brownies with Chris and Stuto. Those were the days!!!!

Brownies! The real deal, saw some great bands there.

Brownies! A friend of mine got stabbed there.