Have you see this individual? We would like to speak to her in regards to a homicide that occurred on 07/14/21 in front of 130 1 avenue . pic.twitter.com/sVIltqI8IZ

The 9th Precinct has released the photo of a woman they'd like to question regarding the homicide investigation of Marvin Bellamy last week on First Avenue.
It's not immediately clear if the woman, seen wearing a navy Champion T-shirt and carrying a multicolored bag, was with Bellamy or may have witnessed the attack... 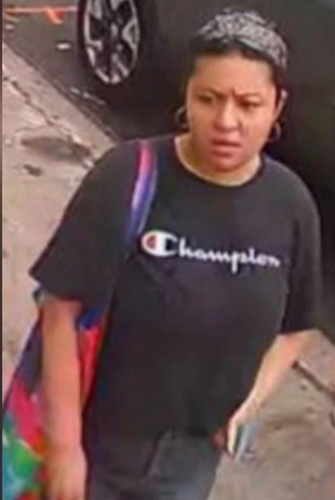 The 37-year-old Bellamy, who lived on the Upper West Side, was found with a puncture wound to his chest in the early morning hours on July 14. (Some reports say he was found between Sixth Street and Seventh Street ... while the latest tweet from the 9th Precinct lists the address as 130 First Ave. — near St. Mark's Place.) He reportedly died later at Mount Sinai Beth Israel.
The NYPD has distributed photos of a possible suspect... 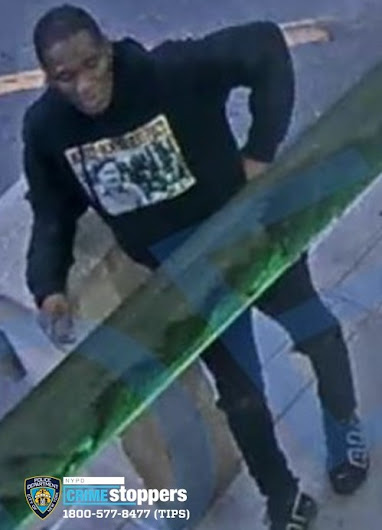 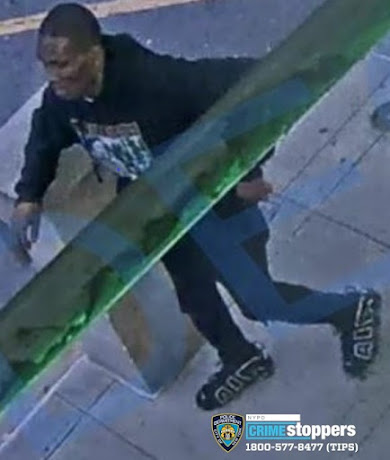 ---
Anyone with information that could help in the investigation is asked to call Crime Stoppers at 1-800-577-TIPS (8477). You may also submit tips online. All calls are strictly confidential.
Posted by Grieve at 5:30 PM

Wow, do they have her photo blinking on the security pods on the Avenues yet?

Doesn't this put a potential witness to a murder at risk?

The fact is they should have put out the suspects photo immediately, because if you don't track down a perp within the first 48 hours of a murder, it gets much harder to track them down, and witnesses are less likely to come forward or to remember any details. Ask any detective and they will tell you that if they don't have a lead, a suspect or an arrest within 48 hours, their chances of solving the case are cut in half.

Now we have desperate murderer on the loose who can strike again, putting the general public in danger. The photo was available right after the murder because CBS 2 news broadcasted the video of the suspects running down the block that same day, so there was no reason to withhold it for a week.

So please don't try to tell me this was some kind of three dimensional chess move by the police to track down the murderer, because now they are so desperate to find him they are putting out posters with a witnesses photo, making her look like a suspect in a murder case. Same thing goes for the murder on 26th St and First Avenue 6 weeks ago, from which there reportedly was a witness, but still there have been no photos or descriptions released. I guess the investigators are playing three dimensional chess with that murder case too.

I'm still curious about how the police shut down the avenue and some of the surrounding area for hours that day. They were checking the security footage in businesses up and down the street, but why shut it down to traffic? It was all very odd and made me think they thought the suspect was still around. I just don't remember such a large area being shut down for other serious crimes that have happened in recent memory.

whataboutism run amok. I think one person on one of the original posts mentioned something about the victim.

The police cant seem to do their job without grandstanding and shutting down a street. They do this all the time. And never ever find the perp. This goes for robberies as well as hit and runs. They should be paid in their ability to prevent and resolve crime, and not just report on it. What a waste of $$$.

In case you are wondering how many serious crimes (murders, rapes, robberies, assaults, burglaries and thefts) go unsolved in New York City, the answer is most of them, or about two thirds. During the pandemic only one in four serious crimes have been solved. Nearly 70 percent of New York City’s shootings last year are unsolved. This is what happens when you don’t put out information in a timely way and ask the public for help. This is what happens when cops, and that includes our future mayor Eric Adams, don’t even live in the city.

Meanwhile police are protecting statues in parks and at Columbus Circle, and have barricaded the arch at Washington Square, Park. They also have manned barricades around every block that has a precinct on it. Go figure. Via the Wall Street Journal:

"More crimes are going unsolved in New York City amid the coronavirus pandemic, according to New York Police Department data.

NYPD records show that detectives and officers solved 26.3% of all serious crimes in the second quarter of this year, including murders, rapes, robberies, assaults, burglaries and thefts.

The portion of such crimes solved by the NYPD fell by 26.5% compared with the same period in 2019, when officers and detectives solved 35.8% of those cases, according to NYPD data.

The second quarter of the year began April 1, just over two weeks after Mayor Bill de Blasio declared a state of emergency for New York City in response to the pandemic.

The portion of crimes solved in the second quarter also fell compared with the previous quarter, before the virus struck, when 31.7% of such crimes were solved by the NYPD."