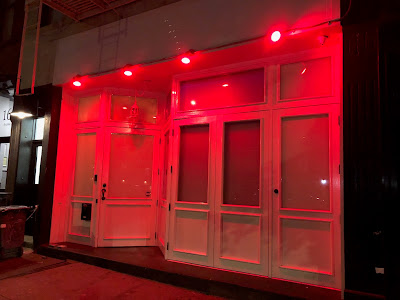 After 15 months as primarily a live music venue, Coney Island Baby recently switched up concepts — and names — here at 169 Avenue A between 10th Street and 11th Street.

As noted on July 29, the space was undergoing a reboot, which included the removal of the Coney Island Baby name from the marquee.

The space is now known as Lola.

Tom Baker, one of the original partners at Coney Island Baby, chalked up the change to the "seven-night-a-week band mill."

"You basically need the venue to be packed for the live shows so everyone goes home happy," he told me. "You have to pay the rent."

"The new vibe is more clubby in a sense," Baker said.

Here's how Bass described the space/scene at Lola in an interview published July 26 at WestwoodWestwood:

We’re keeping the stage, but incorporating it more into a dance floor with beautiful herringbone wood floors, carpeting in the front, lots of palm. It’ll have a very art-fashion world collisions. It can be very fashionable, but janky and artsy and not so perfect. There’ll be a lot of layers to this space. Decorative fabrics, bathroom tiles. We can have shows sometimes early and then turn into a party. The stage could be closed or turned into a VIP room. The various rooms give us options for variety.

The venue will still host the occasional live music and comedy nights, at which times it will go as CIB presents: @ Lola. Tonight, local rockers The Liz Colby Sound begin a Thursday evening residency here. (Find the full schedule of bands here.)

Lola takes its name from the 1961 French romantic drama directed by Jacques Demy.

"A close friend of the CIB family chose the name," Baker said. "She got the inspiration from the film — a testament to the resilience of the heartbroken."

Previously on EV Grieve:
• A 'quick reboot' for Coney Island Baby on Avenue A (July 29)
Posted by Grieve at 4:19 AM

So it is becoming a disco.

What a nightmare for the locals.