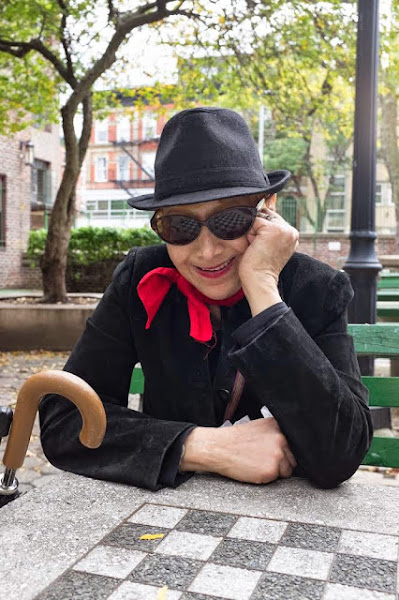 Gigi Watson, a longtime East Village resident, died on Friday. I don't have a lot of information at the moment. Her nephew shared the news via Twitter...

my aunt the psychic numerologist and original east village punker passed away last night. friday the 13th. full moon. from doing blow with rick james to trying to find joey ramone a girlfriend, she had the best stories in the worst way. i loved to make her laugh. rip gigi. ❤️

James Maher interviewed her for our Out and About in the East Village feature in October 2014. It was a classic. Here it is again...

I’m a native New Yorker. I grew up in Ridgewood, on the border between Brooklyn and Queens, which now they can’t decide whether it’s Brooklyn or Queens. It was basically a German, Italian and Jewish neighborhood. The first thing you asked when you met another kid was what was your nationality.

There were places that we didn’t go. Bed Stuy and Red Hook, these were not places to go. In Red Hook, they used to find a dead body every single day. My train was the L, which used to be a horrible, horrible train. The L train connected with the G train, which was murder central. If someone paid me a million dollars in cash and said, ‘Here, get on the G train’, I’d say, ‘No thank you.’

My first apartment in Manhattan was a sublet on Christopher Street in the West Village. I moved in 1979. I then moved to the East Village in 1982, on 2nd Street between A and B. You had to have two or three jobs at the same time just to survive. That’s being a real New Yorker. My rent was so expensive. If I didn’t have two jobs, there would be no way I could cut that rent.

The first club I worked at was Bonds International Casino on Broadway and 45th Street. I was working behind the scenes in the office with guest lists, counting money. We had Blondie, The Clash, Blue Oyster Cult, Motley Crue, the Red Hot Chili Peppers, who sucked. We had all kinds of punk rock bands. That’s where I developed a fear of crowds because the owner, John Addison, sold double the amount of tickets. We had 2,500-seat capacity and he sold 5,000 tickets per performance, and everybody showed up and was hammering on the door, ‘We want the show, we want the show.’ That place was fabulous.

[After Bonds] I worked at an after hours, where I worked the door. Cocaine was fantastic in the 1980s. That went right along with being at the front door. ‘Here, thanks a lot for letting me in,’ and I’d get a gram in my hand. That meant thank you. The stars I met — Nick Nolte, Grace Jones, Robin Williams, Paul McCartney. The list goes on and goes. Cause they would want to party late too.

I first worked in the cashier booth in Crisco [Disco], which is a famous haunt. We must have taken in at least between $8,000 and $10,000 on a Saturday night. It was a lucrative place.

After that I worked at Page 6. I was working the VIP room one month. Liza Minnelli was there snorting her brains out. Rick James comes in and puts a pile of coke on the table. All of a sudden you hear, ‘Freeze.’ So Rick James gets up, ‘Oh, I ain’t going to be arrested, I gotta get out of here, how do I get out?’ I said, ‘Mr. James there’s only one way out and that’s the way you came in.’ He walked out without a problem. It was the people that worked there that got busted because they didn’t have a liquor license.

After that I opened up my club, Trash. I was working at the time at Club 82, which was another after hours on 4th, and the manager there, John Matos said said to me, ‘Gi, why don’t you start your own club? How much do you need?’ We went shopping for furniture and I got all the stuff. I wanted neat 1960s furniture that was gaudy and cool looking. I wanted to do all the murals inside the club. I made the VIP room. I painted a big huge spider web so when you walked in, it was spinning. They would look up and sway from side to side. It was a cool place to be.

But that didn’t last very long because all the people who were great to look at had no money. Punk rockers do not have any money. Nobody had fucking money. Nobody had money for rent, forget about anything else.

Then one day a Hells Angel — this big Angel came in and went up to somebody at the bar and said, ‘Hey faggot’ and pushed him on the shoulder. The guy was a really cool looking punk rock guy and he was intimidated. Once the Angels come in, then it’s their club, and then it’s no longer my club or Trash. One brought many. Nobody would go there anymore. They were too afraid to go through the door. So that’s how Trash ended. That was about the time that punk rock itself was sort of waning.

Punk rock to me means anti-establishment. Punks saw that people conformed all over the place. It’s somebody with real talent to be unique and wild and out there. People used to come and sketch what I was wearing. The more beat up it is the better. They now have distressed leather. What fucking distressed? If you keep it on long enough, believe me it’ll become distressed. I always wanted to look different. I don’t want to look like anybody else. I want to look like me.

wow, i somehow missed this interview the first time around. what a wild, cool person living a wild, cool life! RIP and thanks for coming to this planet!

I remember this 2014 interview, and was nostalgic even back then for the kind of unique and interesting (and vanishing) individuals drawn to both NY and the EV in the 70s and 80s; now, with the ever-increasing flood of bland, upscale and label-driven Millennials and Gen Z-ers diluting that population to the point of vanishing, I mourn even more strongly the passing of this fascinating and history-rich lady. RIP, Gigi, hope you've reconnected with Joey Ramone in the hereafter.

And James Maher, I really miss your interviews.

Awesome interview. She sounded like an incredible and beloved woman. What a life she had! RIP sweet darling.

She was a truly great person. RIP Gigi

Aw, she was such a classic New Yorker! Do her little dogs have somewhere to go?

I have seen Gigi almost every day for decades, although we never spoke. Will miss seeing her stylish little silhouette walking her tiny white poodle. Thank you EV Grieve for posting this and marking her passing.

Poignant to see this posting about the passing of a true East Village spirit along side of the Moxie Hotel post. There are no words...

Wow, what an incredible life she lived!

I'm sure Gigi was a lovely lady and I may have even partied with her back in the day but glorifying drugs and lowlife is not cool. Too many great talents and countless no-names have left us due to the excesses of alcohol and drugs. There is nothing glamorous about being a junkie or a lowlife. Anybody who did (or does) hard core shit survives only by the grace of god.

She is with the angels now. xo

Years ago I was sitting on a bench with my boyfriend when Gigi (who I’d never seen before) came right up to me and said “Look at the lines in your forehead!! I’d give anything to have lines like that!” She explained that she could foretell great financial success by the length and depth and arrangement of the wrinkles in my (prematurely aging) forehead! She then went on to tell me about her four-legged companion, Ruthie. What a dynamo that woman was. Truly an iconic and legendary neighbor. And I must say, after all these years, I can still afford to live on the lower east side and have a little money in the bank. Guess my wrinkles don’t lie!

XTC, fairly certain the interview was not glorifying drugs, it was simply a sharing of her experience. Also, you might want to reserve your judgement of associating drinking and doing drugs with lowlifes. Everyone has a reason for the things that they do.

I'm so sorry to hear she passed away. I never spoke to her but saw her often, talking to her dog on the sidewalk on Avenue A or shopping in Key Food. She never seemed to cede an ounce of her signature punk style to the elements. I'll miss her.

My heart breaks as I read the interview and all of the warm comments. As an EV resident, I am sure we crossed paths. I just wish I would had the chance to have met her. Boy. Life is so uncertain. One day we are here. And the next, we are gone. What a beautiful person. My thoughts are with her family and friends.

Dog walks will be way more boring now, a favorite neighbor of mine, loved talking with her, hearing her stories, watching her get pissed and yell at some kid for disrespecting the neighborhood.
Goodnight Gigi

She was full and energy and style till the end; i recall seeing her very recently in full stride, dressed to the T with her little dog in tow. She lived at the first houses, which actually are one of the first housing projects in the US. New York has 8 million stories but Gigi definitely stood out.

Oh no I just saw this! Gigi left a huge impression on me - she was such a fantastic person to hang out with and interview - so open and warm. I also loved seeing her walking her dog all around the neighborhood. NYC and the EV just lost a great, great person.