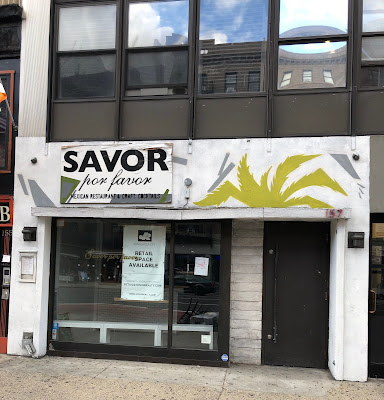 The rather beleaguered restaurant space at 157 Second Ave. is back on the rental market.

In late August, the Marshal seized Savor Por Favor, the Mexican restaurant-bar opened here between Ninth Street and 10th Street last October. The previous tenant, Yuan, which shut down in July 2018, also didn't make it to a 1-year anniversary.

As noted in previous posts on No. 157, this has been a challenging space to make work for any length of time. Before Yuan, Biang! — the sit-down Chinese restaurant via Xi'an Famous Foods owner Jason Wang — closed in March 2017 after 15 months in business.

The previous tenant, Wylie Dufresne's bistro Alder, called it quits after two-and-a-half years at the end of August 2015. (There was a rumored rent increase, per Eater.) Other recent restaurants here (before 2013) included Plum and Cafe Brama.

In previous posts, some commenters have questioned the landlord's role in these closures.