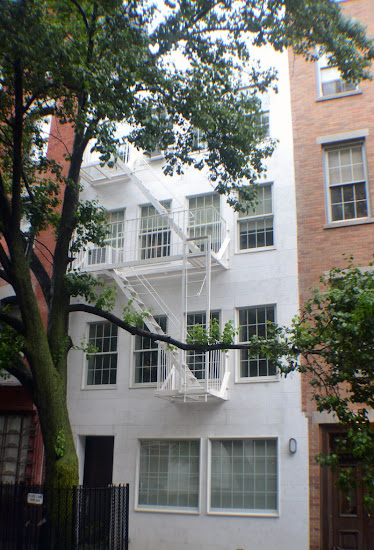 The Post reports that the current tenant of 189 E. Seventh St., a recently renovated four-story townhouse between Avenue B and Avenue C, has played host to sex parties in recent months, according to claims by the landlord in a Manhattan Supreme Court filing.

An investigator for Chang scoped out one of Adler’s August events and found a bouncer at the door, a bar on the rooftop and naked partygoers throughout the home, the landlord claims in his filing.

On the first floor, he noted, “a naked man who sat on a swing was being spanked by two women clad in lingerie.”

Another area featured mattresses on the floor and two naked women sitting on a couch, Wang said.

Sangria was going for $8 a cup, while the marijuana cookies were $15.

The parties have resulted in multiple complaints from neighbors about the noise, visits from cops and violations for garbage piled up outside, said Chang, who alleges that Adler’s illicit use of the property could damage Chang’s reputation and that of the building.

An event scheduled for Saturday night apparently didn't take place as advertised — at the orders of a Manhattan Supreme Court judge.

The Eventbrite posting described the address as "THE MOST LUXURIOUS PLAYSPACE IN THE CITY FOR NAUGHTY!" 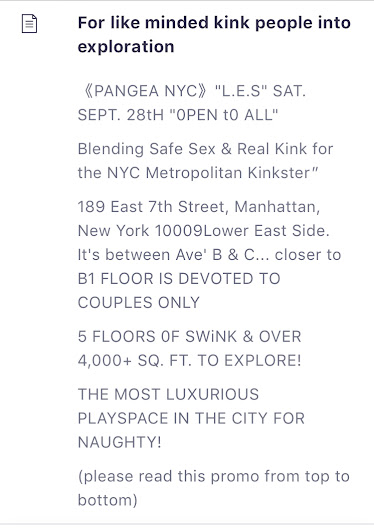 In an email to the Post, Adler denied the allegations, writing: "Not sure what you’re trying to gain from this nonsense. I just don’t get this whole thing no parties are going on."

Court papers also claim that Adler illegally parks his car at a hydrant.

Here's how Sotheby's was pitching the space then:

Upon entering this beautiful townhouse, there are 22-foot-high ceilings. Located on the first floor is a Poggenpohls custom chefs kitchen with custom Statutori marble countertops. The kitchen offers a fully marble covered island, along with a Six Burner Wolf Range, Miele Dishwasher, Viking Fridge and modernized ez-touch cabinets.

The 2nd floor is an open library and living room. The 3rd floor presents a one-of-a-kind open master suite layout with a separate standing shower on a class of its own. The vanities are a combination of top pieces from Ferguson, Kohler, and Restoration Hardware. The 4th floor presents two additional bedrooms, each personalized with their own all-marbled bathrooms and Porcelanosa vanities. At the top of the home lies a private oasis, roof decked in custom Runnen Tiles, along with a Calcutta Stone front ledge and Statutori back ledge.

At least someone is trying to bring NYC back to the good old pre-Giuliani days.

Why do I never get invited to parties like these?? The Nice Guy always finishes last :(

Your honor is was just a fondue party that got really exciting...

noble neolini, exactly right except without the renovation. I remember well when there was a crack market on that block.

LOL. Let the people play! Why the fuck is the culture of someone's parties the landlords business? If it's super noisy to neighbors or leaving trash etc, yes that's a problem. But the fact that it's a sex party shouldn't be at issue.

I would agree with you, except the parties that have been occurring are completely out of control. In fact, given the crowds I’m surprised they were sex parties. In addition, Mr Adler parks on a full time basis in front of the fire hydrant in front of the house. He has collected a mountain of tickets. At this point why he is not towed on a daily basis is beyond me. The 9th knows all about this place. An enormous amount of man hours have been devoted to responding to this place. Even when there are no parties. Yesterday, it was Mr Adler’s girlfriend screaming at him on the phone for hours demanding her stuff. Eventually the police arrived. Looked like she got her stuff, btw.

The building is residential the tenant is acting as as lewd commercial enterprise.

Beautiful story.
This place though. It was on Air BnB for a while. There was no gas hook up for that fancy stove. The landlord is an investor who clearly doesn't know what to do with the space.
I never had an problems with the party goers harrassing passers by but now I know why everyone was so happy. Though I understand how parties late into the am would be annoying to the neighbors.
Thank you NY Post!