Today is the march and rally to Save East River Park 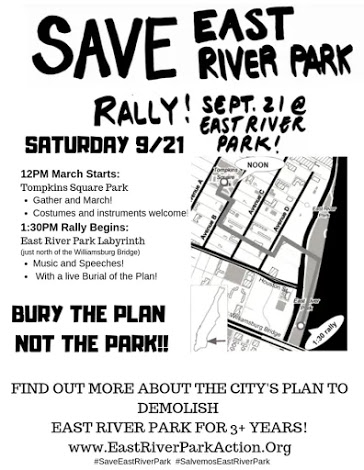 Reminder: Today (Saturday!) is the march and rally tomorrow to protest the city's plan to bury East River Park with eight feet of landfill starting this March as part of protecting the east side against future storms and rising seas.

The march begins at noon in Tompkins Square Park. Demonstrators will march through the neighborhood across the Sixth Street footbridge to East River Park. At 1:30 they’ll rally at the Labyrinth (north of the Williamsburg Bridge) followed by a parade down the promenade to a burial site beneath a tree with a 10.5 foot circumference.

Community group East River Park Action is behind the march and rally. 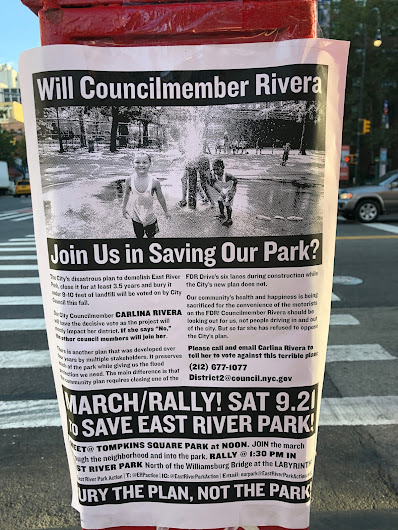 According to Patch, local City Councilmember Carlina Rivera, who has been called out in posters for the march, has advocated "for staged construction to avoid a full park closure but has not outright opposed the plan." She holds a key vote when the plan comes before City Council this fall.

I am willing to give up my access to the park for awhile so that the neighborhood doesn't flood again. This work has to get done. It was so awful after Hurricane Sandy, especially with all of those elderly people who live in the projects right there. They couldn't get up and down the stairs to get food when the power was out to the elevators. I don't want anyone to have to live like that again. Climate change is upon us. We have to address it and protect ourselves and our most vulnerable neighbors. No plan is going to be ideal. None of us wants to lose access to the park for any amount of time. But we have no choice. The sooner we start on this, the sooner it gets done.

We all want flood protection. There are better ways than burying all the life in the park & having it inaccessible for so many people for so many yea te s. Theres a better way.

I am willing to give up my access to the park for awhile so that the neighborhood doesn't flood again.

How about giving up your meat and dairy products while you're at it?

Animal agriculture is the leading driver of climate change, and any efforts to mitigate storm surges with a barrier are going to fail miserably unless most—if not all—of the world's population stops or drastically reduces the animal products they consume.

No pressure; just give it a little thought and consider whether it's the right thing for your lifestyle.

To anonymous 9/21/19, 5:59p.m. yes something has to get done. According to the flyer from Save East River Park, NYCHA has already begun building their own flood walls which will provide IMMEDIATE flood protection. It sounds like vulnerable people in those buildings will be protected.

This seems like a huge opportunity to do with the FDR what San Francisco did with the Embarcadero. That is, dismantle it and reclaim the waterfront.
https://www.sfchronicle.com/chronicle_vault/article/An-ode-to-the-Embarcadero-Freeway-the-blight-by-11543621.php?psid=oc8lM