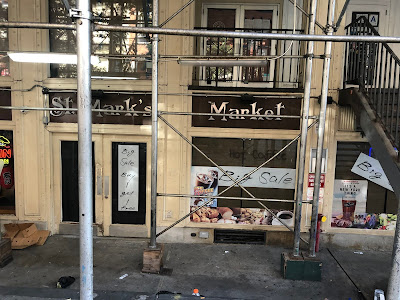 Over the weekend we heard from multiple tipsters that St. Mark's Market at 21 St. Mark's Place between Second Avenue and Third Avenue had started its going-out-of-business sale.

An employee confirmed the closure to EVG correspondent Steven yesterday. He did not know the final day.

For now, store items are on sale... 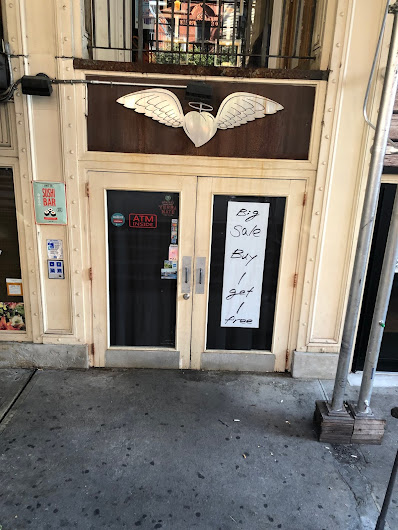 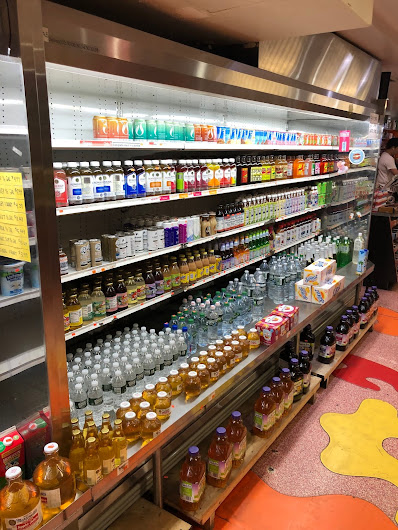 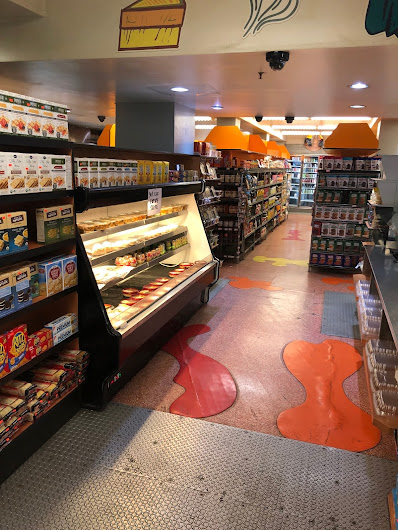 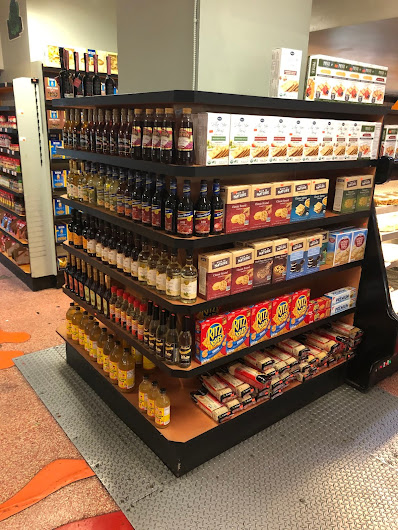 There were signs of trouble back in July, when the one-time 24/7 market went dark for several days before reopening. At the time, a store manager cited multiple problems, starting when a resident on the building's third floor complained about a gas leak. The fire department came shut the store down. The FDNY said they were leaking freon gas. The store’s technician disputed that finding, claiming that their refrigerator tanks were full.

And it can't help that this building has been draped with a sidewalk bridge for the past two-plus years.

This address has a storied history (you can read about it here)... the building was demolished in a mall-style upgrade in 2003, which marked the arrival of the market.

The Chipotle upstairs in the complex closed in August 2018. A Chinese restaurant is going into that space.
Posted by Grieve at 4:30 AM

I think I went in there once, but honestly don't remember.

I may have been starting a trend here, or maybe just running with the crowd.

The dope fiend brigade hanging out under the scaffolding didn't help matters.

I used to frequent this market for late night shopping, but forgot about it once Westside Market opened...

This store served me well for years.

Learn more about the architectural history of the area Thursday evening: https://gvshp.wufoo.com/forms/m1kjfpd11iquwm4/

During hurricane Sandy St Mark's market stayed open by torch light, pretty much gave away food and essentials and invited locals to hang out and drink beer for free. They even. Set up a 'bowling alley' using cantalopes and Pringles tubes. It was comforting to see so much community spirit. Though there produce quality has gone down hill rapidly, and the 'half price sushi after midnight' was definitely not a hot marketing move, it's sad to see this place close. Far less of an icon than Gem spa, for example, but still a loss.

Exact same. 2/3 times per week after work then west side came. I haven’t been in at least 18 months

Went in last night and it had pretty much been picked clean, although there was still lots of produce and some canned and bottled goods. I asked when they were closing and they said "the middle of next week", but I doubt there will be anything left on the shelves by Friday. With everything 50% off, it does warrant a stop.