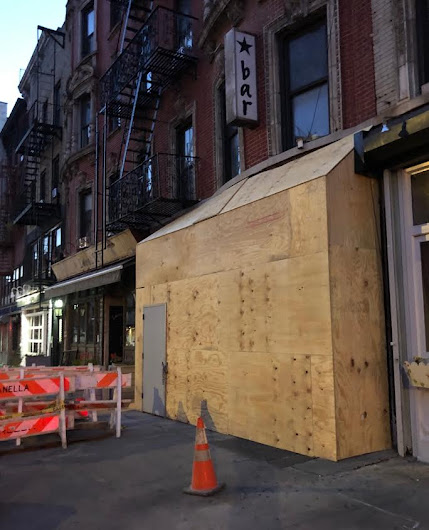 It's plywood tumor time over at 92 Second Ave. between Fifth Street and Sixth Street where interior renovations continue for the new tenant — Sanpoutei Ramen.

As noted back in March, the Sanpou Group, which operates 30 restaurants worldwide, including Sanpoutei Ramen, was opening an outpost in this long-vacant space. Last fall, CB3 OK'd a beer-wine license (they were originally seeking full liquor).

Reviews of Sanpoutei Ramen, which started in Niigata, Japan, in 1967, note that the restaurant "is defined by its authentic Niigata-style ramen, a shoyu-ramen in a clear fish stock-based broth."

Sanpoutei joins a crowded ramen market in the East Village... other recent arrivals include Tatsu Ramen on First Avenue and TabeTomo on Avenue A. In addition, Strings Ramen is opening at 188 Second Ave. at 12th Street.

As for 92 Second Ave., Kabin Bar & Lounge closed here in March 2015. While there were a few potential suitors, the storefront has sat empty these past four years.

And by the end of the day yesterday, the plywood received a coat of green paint... 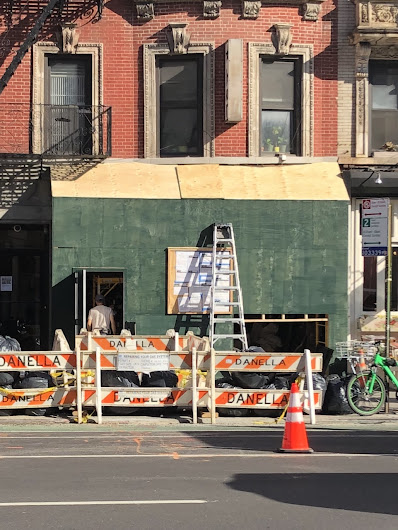 Previously on EV Grieve:
The first sign of Japanese ramen shop Sanpoutei arrives at former Kabin space on 2nd Avenue
Posted by Grieve at 4:10 AM

Whew...So WORRIED I wasn't going to find any Ramen around here this winter.

I know we have reached Peak Ramen but at least this place is offering something different than the usual thick fatty pork broth. A lot of the new ramen places seem to be trying to out-porkfat one another.

As someone who has lived in Japan, this chain of ramen shops are good! I just hope it’s prices are reasonable...

Pssst... this chain of ramen shops IS good!