Report: Associated expected to close by the end of November 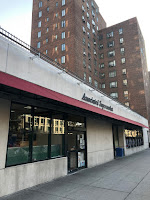 As previously reported, the Associated on 14th Street in Stuy Town will be closing later this year.

Norman Quintanilla, who has been the manager at the store for 16 years, recently told Town & Village that they have told employees the last day will be Dec. 10. However, he said that the supermarket, which has been here for 26 years, will likely close by the end of November.

Quintanilla said that the decision wasn’t easy for store ownership and a number of regular customers were upset by the news.

There's also increased competition, including the Target on 14th and A that opened in July 2018 with a large food-and-beverage selection. In addition, the Trader Joe's is expected to open early next year right across 14th Street.

In an email earlier this month, Stuyvesant Town General Manager Rick Hayduk told residents that they are "working on finding a new tenant with full understanding that a local grocery store is important to the community; but this will take some time."

Previously on EV Grieve:
The Associated on 14th Street in Stuy Town is said to close by year's end
Posted by Grieve at 4:00 AM

Stuy Town Mgmt: "Hey, its a no brainer, we can kill off the seniors through starvation!"

I feel very bad for the elderly folks who don't know where to go, but there are several other grocery stores nearby (not just the future Trader Joe's) and Associated sold me bad food more than once (what's in those clamshells!) so I have to say, I'm not crying too hard. Mourn, rather, the Fruit & Veg store that used to be on B and 14th, which though small had miles better produce, a selection of other goods that people actually wanted to buy and that were not produced c. 1950, and was also nuked by the appearance of Target.

...they are "working on finding a new tenant with full understanding that a local grocery store is important to the community; but this will take some time - Yes, I'm sure other grocery stores will be lining up down the block to take this space, because it's not like Trader Joe's is stiff competition or anything. And I'm guessing that "some time" will be more like the 12th of Never.

It is a fair concern that the Seniors in Sty Town have a affordable supermarket that provides for their needs. Included is the ability to travel to the store and have access to affordable prices. Seniors are still a sizable population at STY town some have lived there all their lives coming in as children there is a unwritten covenant with these tenants and they remain valuable members of the community.

Or, Stuy Town will build a 15fl luxury apartment building.

May I suggest a bowling alley? Seriously lower the damn rent if you really want a market in this space. I like some stuff at TJ's but it's never been a one stop shopping place for me. Agree with the other commenter I was distraut when the small but had everything I needed to make a meal market closed on B near 14th st.

StuyTown Management: “In order to help our seniors to more easily travel to the far-flung and distant grocery stores which they will now depend on for their daily sustenance, we will be offering all seniors access to free motorized skateboards, gas powered go-karts with built-in shopping baskets, and motorized paragliders, which can be easily accessed from their rooftops. We are also planning to roll out a free kayak rental program for seniors who want to go grocery shopping in Brooklyn.”

Change is sometimes hard for people but I cannot fathom how people are upset about finding another grocer when two are about to be open directly across the street. Target is not fancy but it's okay. Trader Joe's... I see seniors in the other stores all the time, apparently it's not just Millennial food. People on fixed incomes may appreciate the value that TJ's offers, and the only problem with the store is the checkout queuing (which they've largely seemed to solve lately)

This is not a problem until all the dust settles and people try the options that will be available going forward. I do not expect ex-Associated customers to show up at Whole Foods, but there are reasonable nearby options + what we really need is affordable Metrocards for fixed-income seniors and better bus service throughout the neighborhood.

That Associated is REALLY NOT a good supermarket, by the way. I was not impressed by the store conditions whenever I've been in there, although others' experiences may have varied. At best, it was merely okay.

For the elderly & disabled who live in Stuy Town, Associated is in a very good and safe location; crossing 14th St. to get to Trader Joe's is no small issue. That's a dangerous crossing, and I'm sure people would rather have a supermarket that's (essentially) on their own turf.

The same commenters who are saying that it’s no it’s no big deal for seniors to cross a dangerous and very busy cross street to go to the grocery store the same ones who will be cursing those seniors as they hold up traffic while they struggle to cross the street with their shopping carts and walkers. To sit here and say you do not believe that it is seniors who are saying this will create a burden and a danger to their lives, from the very people who have lived there most of their lives, is the height of willful ignorance and arrogant Millennialsplaining.

Great, now seniors are going to have to wade through the daily hordes of school kids and vagrants who congregate and have daily fights on those corners too? Sorry but 14th street is the DMZ, and once you go south of it all bets are off. Once you cross over the 14th Street DMZ, you might as well call Rambo to come rescue you.

@anon 12:34 and 1:31: then advocate to make 14 street a bus and truck priority street with extended pedestrian spaces that shorten crossing the street by 50%. Safer for everybody

Sorry but Trader Joe’s is nothing like an actual supermarket - you cannot run in and buy a quart of milk or an ingredient you need last minute. It’s a commitment to face the huge lines so you need to plan an off time to go - and hope you don’t forget anything. Also everything is prepackaged and selection is very limited. It’s a “fun” store but not good for everything.

Sitting here with my 81 year old widower father in the Stuy Town apt I was raised in that he’s lived in since 1969. Telling him the Associated is closing was a little heartbreaking. Crossing 14th , dealing with insane TJ crowds, crossing back when his mobility is limited and in decline...it’s really stressing him (and me) out when he’s already dealing with how to age in place in a complex that would love to flip his stabilized apt. He has one kid, me, who is raising a family with young kids and can’t be his 24/7 grocery shopper. Have a heart for community members you may not know.